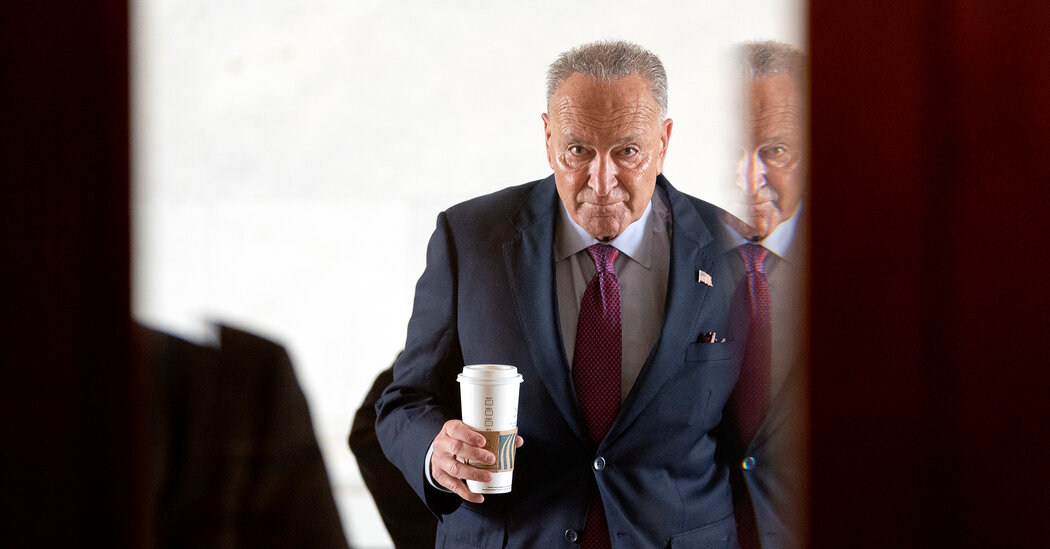 Well, it’s infrastructure week … again … and that must mean we’re up here at the Capitol waiting for a deal.

It’s been less than a month since President Biden and a bipartisan group of senators announced that they had agreed on a $1.2 trillion infrastructure package, including about $600 billion in new spending. The fragility of the agreement was clear almost instantly, and so it is still. Senators who backed the deal in principle have been haggling over the details, and over the weekend, negotiators said they had abandoned a key funding mechanism that they had previously agreed to: increased tax enforcement by the Internal Revenue Service.

Now, Senator Chuck Schumer of New York, the Democratic leader, is expected to call a procedural vote on Wednesday, known as a cloture vote, to open debate on a shell of the bill — and it is not clear that he has the 60 votes he needs. That means the legislation could be in jeopardy before it’s even written.

All of this would be bog-standard congressional sausage-making if the issue at hand were just the contents of an infrastructure package. Instead, it has basically become a referendum on the concept of bipartisanship.

The success of most of Mr. Biden’s agenda depends on either getting 10 Republicans on board or getting rid of the filibuster, a measure that centrist Democrats like Senators Joe Manchin III of West Virginia and Kyrsten Sinema of Arizona have refused to do because they insist they can get 10 Republicans on board. And if they can’t manage that even on a bill that Republicans helped negotiate, then — well, we don’t know what then.

For the latest on the legislative wrangling and its implications, I went to Emily Cochrane, one of The Times’s congressional reporters, who has been covering the infrastructure negotiations from the start.

Hi Emily. Why is Schumer calling a cloture vote before the bill’s text is finalized? Is that unusual?

It’s something that has been done before, in part because the legislative process just takes a lot of time in the Senate. Should this pass, we have a handful of votes and a few days before there’s an actual vote on substance.

This is also an institution that works at its best with a hard deadline (that perhaps can be moved once or twice without too much pain). So it’s also a hardball move on Schumer’s part — he doesn’t want this process to drag on much longer, and he’s forcing some kind of a deadline on the negotiators.

What is the Republican reaction right now — are Republican senators mostly united against the cloture vote, or is the caucus split?

As of now, they seem mostly united against the cloture vote. The Republican negotiators have pushed for Schumer to delay it till Monday, arguing that they can wrap up legislative text by then.

Does the opposition reflect objections to the substance of the bipartisan framework, or is it mainly procedural?

I think it’s important to note that 10 Republicans have not committed to supporting the bipartisan deal once it emerges, even if a handful of them are making some supportive noises about substance.

But the five main Republican negotiators have also joined with their colleagues in raising concerns about what they say is a premature procedural step.

What is the status of the negotiations over the bill’s text? Are there indications that the negotiators have made progress in recent days or weeks?

They are ongoing as you read this. They’ve been in a marathon series of meetings — with some lasting more than two hours — and have hammered out some details. I.R.S. enforcement money has been kicked out, for example, and they seem to be coalescing around some alternatives.

But paying for infrastructure is the hardest hurdle to clear, especially when both sides have drawn significant red lines.

If the vote fails on Wednesday, is the bipartisan deal dead, or could it be revived?

It could be revived and brought up again. It’s going to be an extremely long, hot infrastructure summer.

On Politics is also available as a newsletter. Sign up here to get it delivered to your inbox.

Is there anything you think we’re missing? Anything you want to see more of? We’d love to hear from you. Email us at onpolitics@nytimes.com.