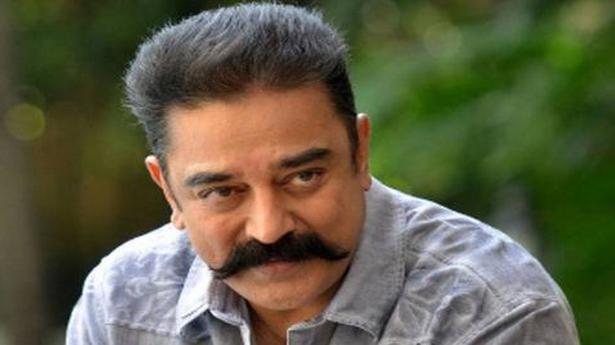 
In an effort to seek ‘action plans’ and answers to ‘common man questions’, Makkal Needhi Maiam founder Kamal Haasan will be in conversation with Kerala’s Health Minister KK Shailaja Teacher on Sunday morning, along with Dr. Ramanan Lakshminarayanan, founder and director of the Center for Disease Dynamics, Economics & Policy (CDDEP) in Washington, D.C. and psychiatrist Shalini, to cut through the misinformation spread via social media about the pandemic. The conversation will be live on party’s (Maiam) Youtube channel and Mr. Haasan’s Instagram handle.

In a quick telephonic conversation, Mr. Haasan said that he would be discussing the ‘New Normal’ in the post-Covid-19 society. “There are two reasons why I am doing it,” he said, adding, “They are qualified. And, we are sort of bombarded with gossip. It is what they say getting wisdom from Whatsapp University. I am not talking about Whatsapp itself, but its users who are spreading all sorts of information – most times, it is confusing and alarming. What we are trying to do is talk to the experts and look at the new normal after Covid-19. We want to discuss practical problems – instead of waxing eloquent on theories – and look at action plans,” said Mr. Haasan.

He suggested that there are many lessons to be learnt from their experiences. “There are going to be many phases (of Covid-19 break out) and we have to acquire immunity without leaving it totally to nature’s hands,” said Mr. Haasan, adding that this will be an effort to bring that wisdom into Tamil Nadu.

Mr. Haasan also pointed out how, in times like these, ‘Citizens partnership and knowledge’ is important to develop a basic ‘know-how’ and suggestions on what are good and bad practices to ensure our well-being.

Heaping praise on Kerala’s Health Minister, KK Shailaja Teacher, Mr. Haasan said that she is one of the very few ministers who seems to know what she is talking about. “Being a science teacher, she has approached the issues scientifically and logically. Kerala government has functioned autonomously [in this pandemic],” he said.

Asked if he thought the Opposition parties have adequately performed their duties, Mr. Haasan suggested that Opposition must also think about how right we can be.

“In politics, I don’t like calling one party as the Opposition. It is semantics and linguistics. You don’t have to be enemies as people also have given their votes to them (Opposition). Opposition should also think about ‘How right we can be’. That is what I am trying to do,” he said.

In a similar vein, he added that he also doesn’t like the term ‘Lock down’. “We borrowed the word from China, whose authoritarian government had used it. I prefer the term ‘Stay At Home’ or ‘Home alone’.

While admitting that Tamil Nadu Government is not ‘floundering’ unlike the first world countries such as the United States of America, there are many areas where they could have done better, he said.