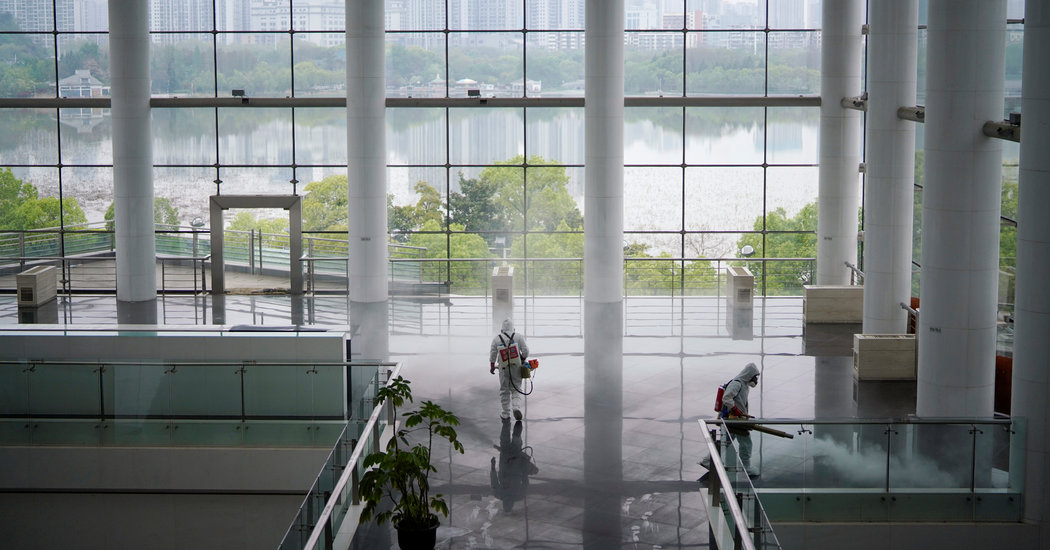 WASHINGTON — Senior Trump administration officials have pushed American spy agencies to hunt for evidence to support an unsubstantiated theory that a government laboratory in Wuhan, China, was the origin of the coronavirus outbreak, according to current and former American officials. The effort comes as President Trump escalates a public campaign to blame China for the pandemic.

Some intelligence analysts are concerned that the pressure from administration officials will distort assessments about the virus and that they could be used as a political weapon in an intensifying battle with China over a disease that has infected more than three million people across the globe.

Most intelligence agencies remain skeptical that conclusive evidence of a link to a lab can be found, and scientists who have studied the genetics of the coronavirus say that the overwhelming probability is that it leapt from animal to human in a nonlaboratory setting, as was the case with H.I.V., Ebola and SARS.

Secretary of State Mike Pompeo, a former C.I.A. director and the administration’s most vocal hard-liner on China, has taken the lead in pushing American intelligence agencies for more information, according to current and former officials.

And Anthony Ruggiero, the head of the National Security Council’s bureau tracking weapons of mass destruction, expressed frustration during one videoconference in January that the C.I.A. was unable to get behind any theory of the outbreak’s origin. C.I.A. analysts responded that they simply did not have the evidence to support any one theory with high confidence at the time, according to people familiar with the conversation.

Any American intelligence report blaming a Chinese institution and officials for the outbreak could significantly harm relations with China for years to come. And Trump administration officials could use it to try to prod other nations to publicly hold China accountable for coronavirus deaths even when the pandemic’s exact origins cannot be determined.

The State Department declined to answer questions about Mr. Pompeo’s role. Spokesmen for the White House and the National Security Council declined to comment. An official from the Office of the Director of National Intelligence acknowledged that the intelligence agencies had not agreed on an origin theory but were tracking down information and frequently updating policymakers.

NBC News reported earlier that administration officials had directed intelligence agencies to try to determine whether China and the World Health Organization hid information early on about the outbreak.

For months, scientists, spies and government officials have wrestled with varying theories about how the outbreak began, and many agree on the importance of determining the genesis of the pandemic. In government and academia, experts have ruled out the notion that it was concocted as a bioweapon. And they agree that the new pathogen began as a bat virus that evolved naturally, probably in another mammal, to become adept at infecting and killing humans.

A few veteran national security experts have pointed to a history of lab accidents infecting researchers to suggest it might have happened in this case, but many scientists have dismissed such theories.

Mr. Trump has spoken publicly about the administration’s “very serious investigations” of the virus’s origin and China’s culpability. Those inquiries took on new urgency in late March, when intelligence officials presented information to the White House that prompted some career officials to reconsider the lab theory. The precise nature of the information, based in part on intercepted communications among Chinese officials, is unclear.

The current and former officials did not say whether Mr. Trump himself, who has shown little regard for the independent judgments of intelligence and law enforcement officials, has pressured the intelligence agencies. But he does want any information supporting the lab theory to set the stage for holding China responsible, according to two people familiar with his thinking.

He has expressed interest in an idea pushed by Michael Pillsbury, an informal China adviser to the White House, that Beijing could be sued for damages, with the United States seeking $10 million for every death. At a news conference this week, Mr. Trump said the administration was discussing a “very substantial” reparations claim against China — an idea that Beijing has already denounced.

“President Trump is demanding to know the origins of the virus and what Xi Jinping knew when about the cover-up,” Mr. Pillsbury said.

Major gaps remain in what is known about the new pathogen, including which kind of animal infected humans with the coronavirus and where the first transmission took place.

Richard Grenell, the acting director of national intelligence, has told his agencies to make a priority of determining the virus’s origin. His office convened a review of intelligence officials on April 7 to see whether the agencies could reach a consensus. The officials determined that at least so far, they could not.

Intelligence officials have repeatedly pointed out to the White House that determining the origins of the outbreak is fundamentally a scientific question that cannot be solved easily by spycraft.

A former intelligence official described senior aides’ repeated emphasis of the lab theory as “conclusion shopping,” a disparaging term among analysts that has echoes of the Bush administration’s 2002 push for assessments saying that Iraq had weapons of mass of destruction and links to Al Qaeda, perhaps the most notorious example of the politicization of intelligence.

The C.I.A. has yet to unearth any data beyond circumstantial evidence to bolster the lab theory, according to current and former government officials, and the agency has told policymakers it lacks enough information to either affirm or refute it. Only getting access to the lab itself and the virus samples it contains could provide definitive proof, if it exists, the officials said.

The Defense Intelligence Agency recently changed its analytic position to formally leave open the possibility of a theory of lab origin, officials said. Senior agency officials have asked analysts to take a closer look at the labs.

The reason for the change is unclear, but some officials attributed it to the intelligence analyzed in recent weeks. Others took a more jaundiced view: that the agency is trying to curry favor with White House officials. A spokesman for the agency, James M. Kudla, disputed that characterization. “It’s not D.I.A.’s role to make policy decisions or value judgments — and we do not,” he said.

Some American officials have become convinced that Beijing is not sharing all it knows.

Among Mr. Trump’s top aides, Mr. Pompeo in particular has tried to hammer China over the lab. On Wednesday, he said that the United States still had not “gained access” to the main campus of the Wuhan Institute of Virology, one of two sites that American officials who favor the lab accident theory have focused on, along with the Wuhan Center for Disease Control and Prevention.

Mr. Pompeo seemed to refer to internal information about the outbreak during an interview on April 17 with Hugh Hewitt, a conservative radio host.

“We know that the Chinese Communist Party, when it began to evaluate what to do inside of Wuhan, considered whether the W.I.V. was, in fact, the place where this came from,” said Mr. Pompeo, referring to the Wuhan Institute of Virology.

The State Department declined to indicate what was behind his assertion.

Scientists who study the coronavirus have maintained that the initial spillover from animal to person could have occurred in any number of ways: at a farm where wild animals are raised, through accidental contact with a bat or another animal that carried the virus, in hunting or transporting animals.

The scientists have also scrutinized the new pathogen’s genes, finding that they show great similarity to bat coronaviruses and bear no hints of human tampering or curation.

The odds were astronomical against a lab release as opposed to an event in nature, said Kristian G. Andersen, the lead author of the paper published in Nature Medicine and a specialist in infectious disease at the Scripps Research Translational Institute in California.

He acknowledged that it was theoretically possible that a researcher had found the new virus, fully evolved, in a bat or other animal and taken it into the lab. But, he said, based on the evidence his team gathered and the numerous opportunities for infection in the interactions that many farmers, hunters and others have with wild animals, “there just isn’t a reason to consider the lab as a potential explanation.”

No evidence supports the theory that the coronavirus originated “in a laboratory either intentionally or by accident,” Daniel R. Lucey, an expert on pandemics at Georgetown University who has closely tracked what is known about the origins, wrote this week.

He has called on China to share information about animals sold at a market in Wuhan that was linked to some of the earliest known cases of people infected with the virus, though not the first one. Dr. Lucey has raised questions about whether the market was, in fact, where the virus spilled over from animals to people. The limited information released about environmental samples taken from the market that were positive for the coronavirus do not resolve whether the source was animals sold there or people working or visiting the market, or both, he wrote.

But Richard Ebright, a microbiologist and biosafety expert at Rutgers University, has argued that the probability of a lab accident was “substantial,” pointing to a history of such occurrences that have infected researchers. The Wuhan labs and other centers worldwide that examine naturally occurring viruses have questionable safety rules, he said, adding, “The standards are lax and need to be tightened.”

American officials said they closely watched China’s government this winter for signs of a lab accident but found nothing conclusive. In February, President Xi Jinping stressed the need for a plan to ensure the “biosafety and biosecurity of the country.” And the Ministry of Science and Technology announced new guidelines for laboratories, especially ones handling viruses.

Global Times, a popular state-run newspaper, then published an article on “chronic inadequate management issues” at laboratories, including problems with biological disposal.

And American scientists who had developed relationships with researchers in the Wuhan labs had been in touch with them during the initial outbreak. But by mid-January, American officials said, the Chinese scientists cut off official communications.