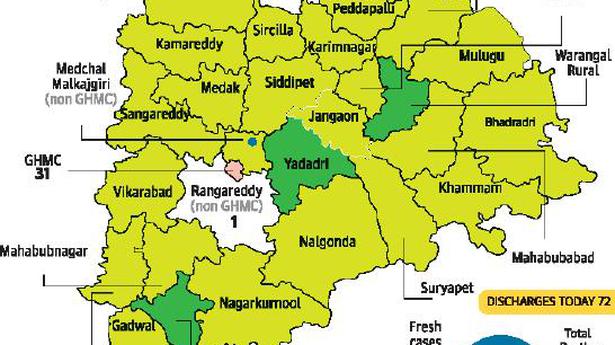 Three COVID-19 patients died in Telangana on Monday taking the toll to 56. This is the seventh consecutive day starting May 19 that Telangana is reporting COVID deaths.

There was spike number of COVID cases as 66 more tested positive for the virus on Monday and 72 were discharged. This is second highest number of positive cases reported in a day this month. A total of 79 cases was reported on May 11.

Of the 66 cases, 31 are from Greater Hyderabad Municipal Corporation (GHMC) area, one from Rangareddy, 15 migrants, and 18 foreign evacuees. For the first time, a column titled ‘Maharashtra’ was added to the bulletin and one case was mentioned under the column.

Officials said the one case was that of a person from Maharashtra who got admitted at a private hospital and tested positive. The rise in number of deaths is a cause for worry and 22 deaths were recorded in the past seven days.

Superintendent of Gandhi Hospital M Raja Rao reiterated that most of the patients who died had co-morbidities such as hypertension, diabetes, along with organ failure. However, there is hope as some 10 patients with health complications have recovered.

The number of people who were discharged on Monday was 72, which is one of the highest, Hospital authorities said most of them were among the 79 people admitted on May 11. They were discharged after completing 14 days of isolation.