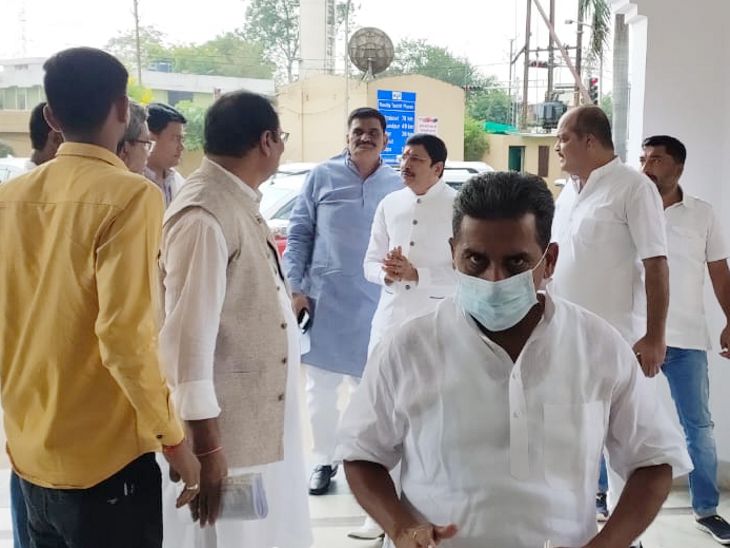 BJP state president and Maihar MLA met at the hotel.

In any case, the focus of the BJP, which is making every effort to save its stronghold in Raigaon, has now turned towards Narayan, Maihar MLA, who is showing rebellious attitude in Vindhyas. BJP state president Vishnudutt Sharma met Narayan on Monday. Narayan did not disclose what happened in this closed room meeting between the two, but VD Sharma definitely said. Although the BJP state president also left saying that Narayan was angry for some reason, but will now do the work of BJP.

BJP state president and Maihar MLA met at the hotel. Talked for a while and then sat together in the same car and reached the air strip. Both kept talking there for some time and then Sharma went towards the plane saying that Narayan would now do the work of BJP.

This meeting between the two leaders is being considered very important from the point of view of Raigaon by-election. Their meeting and talk has given a new direction to the discussion in the political corridors. It is believed that the BJP, which has remained silent on Narayan’s rebellious attitudes, has started sounding alarm bells, so now the state president himself has intervened.

Let us tell you that Narayan Tripathi, the BJP MLA from Maihar, has been showing a rebellious attitude against the BJP and the state government for a long time. Recently, in a conference of farmers in Rampur, he had also said that there is no fear without love, you guys should settle Raigaon.

Those who came to take 9 crores left the same, police engaged in investigation on three points. The bags that came to take...

know - August 12, 2021 0
The Argentine, 34, left Spanish side Barcelona and signed a two-year contract with Qatari-owned Paris St Germain (PSG), with an option for a third...

know - February 20, 2020 0
A shooter with suspected far-right beliefs killed nine people at a shisha bar and a cafe in the German city of Hanau, the...

How employee burnout may be putting your organization at risk

know - February 5, 2020 0
The stage is set for the country’s biggest horticultural fair with the four-day National Horticultural Fair, being organised by the Indian Institute of...