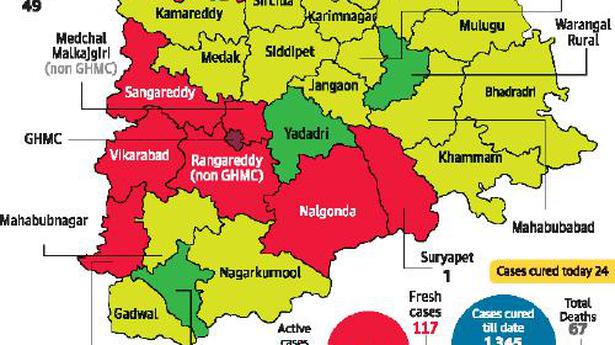 Telangana continued to record high number of COVID-19 cases as 117 more samples tested positive for coronavirus on Thursday. This is the highest number of positive cases recorded in a day till date. The second highest of 107 was recorded on Wednesday. Four more COVID-19 patients succumbed to the virus.

Curiously, officials from the State Health department officials and Health Minister Eatala Rajender’s office stressed the distinction between cases detected among people from the State, and among those who have returned from other States and countries.

In the medical bulletin issued on Thursday followed by an explanation, the Health department officials said that of the 117 new cases, 66 are from the State and the remaining 51 cases are of migrants and deportees from Saudi Arabia.

Giving further break-up, they said that of the 66 cases from the State, 58 are from Greater Hyderabad Municipal Corporation (GHMC) area , five from Rangareddy, two from Medchal and one from Siddipet. Of the 51, two are migrants and 49 are Saudi Arabia ‘deportees’.

An explanatory note from Mr Rajender’s office stated that apart from people from the State, people from other States of our country are among those who have come from Saudi Arabia.

“Many among them contracted coronavirus in Saudi. They tested positive for the virus when tests were conducted here They are admitted to quarantine centres of Army and Air Force. ”

Meanwhile, Telangana Health department’s medical bulletin led to some sort of a confusion for the second consecutive day. Officials said that cumulative cases in the State were 2,256.

When clarification was sought, senior officials from the Health department said that they have added 41 active cases who are in home isolation and at private hospitals.

Rastagi, the chief secretary to the chief minister who exposed the e-tender scam; Bhopal...

know - March 24, 2022 0
Call center workers who handle Medicare issues for Americans went on a one-day strike at facilities in Mississippi and Louisiana. Employees at the call centers...

know - June 1, 2020 0
The two countries are studying whether the drug is safe and effective for the prevention and early treatment of Covid-19. And protests in...

Palwal News In Hindi : Market is opening in Palwal at Odd-Even, Muslim society...

Cantor collided with tractor-trolley in an attempt to save the destitute animal, death of...

know - May 28, 2021 0
Hindi NewsLocalHaryanaPanipatCantor Collided With Tractor trolley In An Attempt To Save The Destitute Animal, Death Of Driver, Leg Of Conductor, Helper InjuredAds से...