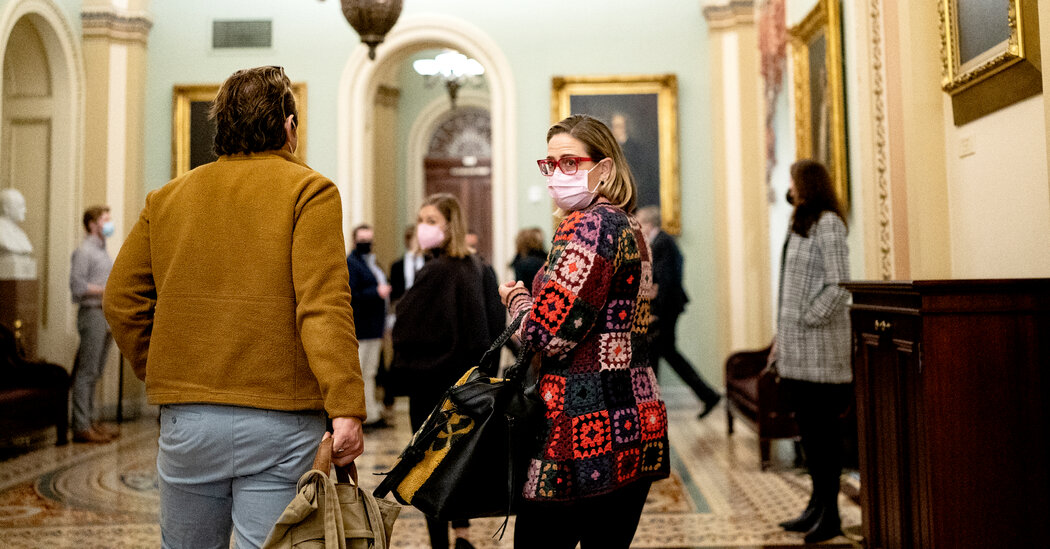 WASHINGTON — President Biden’s campaign to push new voting rights protections through Congress appeared all but dead on Thursday, after it became clear that he had failed to unite his own party behind his drive to overhaul Senate rules to enact the legislation over Republican opposition.

In an embarrassing setback for Mr. Biden, Senator Kyrsten Sinema, Democrat of Arizona, stunned her colleagues just hours before the president was slated to make his case to them in person at the Capitol by taking the Senate floor to declare that she would not support undermining the filibuster to pass legislation under any circumstances.

The announcement by Ms. Sinema, who had long opposed changing Senate rules, left Mr. Biden and Democrats without an avenue for winning enactment of the voting rights measures, which they have characterized as vital to preserve democracy in the face of a Republican-led drive in states around the country to limit access to the ballot box.

It came two days after the president had put his reputation on the line to make the case for enacting the legislation by any means necessary — including scrapping the famed filibuster — with a major speech in Atlanta that compared opponents of the voting rights measures to racist figures of the Civil War era and segregationists who thwarted civil rights initiatives in the 1960s.

And it raised the question of what Mr. Biden would do next, given that Republicans are all but certain to use a filibuster a fifth time to block the voting rights measures, and that Democrats lack the unanimous support needed in their party to change the rules to enable them to muscle the bills through themselves.

“Like every other major civil rights bill that came along, if we miss the first time, we come back and try it a second time,” Mr. Biden said after emerging empty-handed from his session with Senate Democrats. “We missed this time.”

But his visit to the Capitol was reminiscent of his experience last fall, when he twice made the trip up Pennsylvania Avenue to appeal to House Democrats to quickly unite behind the two major elements of his domestic agenda — a $1.2 trillion bipartisan infrastructure bill and a roughly $2 trillion social safety net and climate package — only to be rebuffed both times. He eventually won passage of the public works bill, but the other measure remains in limbo because of objections from Senator Joe Manchin III, Democrat of West Virginia, who like Ms. Sinema reiterated his opposition on Thursday to doing away with the filibuster to push through the voting rights legislation.

It was a disappointing turn of events for a president who has emphasized his long experience as a senator and his knowledge of how to get things done on Capitol Hill.

In a last-ditch effort to bring the two on board, Mr. Biden met with Ms. Sinema and Mr. Manchin at the White House on Thursday night to discuss the voting rights measures, though neither of them had appeared to leave room in their statements for compromising on Senate rules.

Late Thursday night, Senator Chuck Schumer of New York, the majority leader, announced that because of health and weather threats, the Senate would put off its consideration of the voting bill until at least Tuesday.

His announcement meant that the Senate would miss his self-imposed deadline of acting by Martin Luther King’s Birthday on Monday. But he said he intended to proceed despite the setbacks.

“Members of this chamber were elected to debate and to vote, particularly on an issue as vital to the beating heart of our democracy as this one,” Mr. Schumer said. “And we will proceed.”

It was always an uphill fight, since Ms. Sinema and Mr. Manchin had stated repeatedly that they would not use the bare 50-vote Democratic majority to weaken the filibuster, the procedural weapon that effectively requires 60 votes to move forward on major legislation, which they argue is fundamental to the nature of the Senate.

But supporters of the voting rights bills had hoped that the newfound zeal of Mr. Biden, a longtime protector of Senate traditions, for changing the filibuster — along with a lobbying campaign by other Democrats — would help change their minds.

In her remarks, Ms. Sinema said that while she backed the voting rights legislation her party is pushing and was alarmed about voting restrictions being enacted by Republicans in some states, she believed that a partisan change in the filibuster would only fuel already rampant political division.

“These bills help treat the symptoms of the disease, but they do not fully address the disease itself,” Ms. Sinema said. “And while I continue to support these bills, I will not support separate actions that worsen the underlying disease of division infecting our country.”

Her action left many of her Democratic colleagues privately fuming, with some saying it was a dagger delivered to the president in a way that would draw maximum attention to Ms. Sinema. Some said her arguments were weak, particularly her insistence that Democrats should have done more to bring Republicans on board, when they have tried but failed to do so for months. And others groused that Ms. Sinema seemed glued to her phone during much of the meeting with the president.

But her speech was cheered by Republicans who credited her with nothing less than protecting the Senate.

“It was extraordinarily important,” Senator Mitch McConnell, the Kentucky Republican and minority leader who was on the floor during Ms. Sinema’s speech, told reporters. He called it a “conspicuous act of political courage” that “saved the Senate as an institution.”

Later, the mood was somber in the meeting where Mr. Biden addressed Democrats, with lawmakers resolute about the voting rights issue but resigned to the bind that Ms. Sinema’s stance had put them in, according to several people who attended and spoke about it on the condition of anonymity.

Mr. Biden waxed nostalgic about his days in the Senate, reflecting on his strong relationships with Republicans and lamenting the demise of bipartisan collegiality but saying little about the problem at hand — his own party’s refusal to get behind his strategy.

Why are voting rights an issue now? In 2020, as a result of the pandemic, millions embraced voting early in person or by mail, especially among Democrats. Spurred on by Donald Trump’s false claims about mail ballots in hopes of overturning the election, the G.O.P. has pursued a host of new voting restrictions.

Why are these legislative efforts important? They have fueled widespread doubts about the integrity of U.S. elections, brought intense partisan gamesmanship to parts of the democratic process and are likely to affect voters of color disproportionately.

How are Democrats pushing back? In Congress, Democrats have focused their efforts on two sweeping bills that protect access to voting and clarify how to count electoral votes, but Republicans in the 50-50 Senate have blocked both. President Biden endorsed changing the Senate’s filibuster rules to pass the legislation.

Which states have changed their voting laws? Nineteen states passed 34 laws restricting voting in 2021. Some of the most significant legislation was enacted in battleground states like Texas, Georgia and Florida. Republican lawmakers are planning a new wave of election laws in 2022.

Will these new laws swing elections? Maybe. Maybe not. Some laws will make voting more difficult for certain groups, cause confusion or create longer wait times at polling places. But the new restrictions could backfire on Republicans, especially in rural areas that once preferred to vote by mail.

He suggested that Senator Strom Thurmond of South Carolina, once a segregationist candidate for president, had been more willing to back voting rights than current Republican senators, according to one of the people. And he dismissed a question about whether Republicans would ram through conservative proposals if the filibuster were weakened by saying that the party was too divided to do so.

Mr. Manchin, who often cites Senator Robert C. Byrd of West Virginia as his inspiration, acknowledged that Mr. Byrd had been willing to support changes in Senate rules, but had done so in a consensus fashion.

Ms. Sinema’s speech was a devastating development for Democrats, who just hours earlier on Thursday had begun an intricate process to speed a voting rights showdown.

It began with House passage on Thursday morning of a repackaged pair of voting rights bills, which passed, 220 to 203, on a party-line vote with Republicans in opposition.

The new legislation combined two separate bills already passed by the House — the Freedom to Vote Act and the John Lewis Voting Rights Advancement Act — and joined them in what had been an unrelated measure covering NASA. The move would allow the Senate to bring the bill directly to the floor, skirting an initial filibuster, although Republicans could still block it from coming to a final vote.

Democrats said the legislation was urgently needed to offset efforts taking hold in Republican-led states to make it more difficult to vote after Democratic gains in the 2020 elections and former President Donald J. Trump’s false claim that the vote was stolen. They argued that the flurry of new state laws was clearly intended to reduce voting in minority communities, amounting to a contemporary version of the kinds of restrictions that were prevalent before the enactment of landmark civil rights laws in the 1960s.

“There are people who don’t want you to vote, and they are using every tool in the toolbox to make it harder,” said Representative Debbie Wasserman Schultz, Democrat of Florida, referring to the enactment over the past year of new voting restrictions in Republican-led states. “Voter suppression has not been consigned to the history books. It is here today, right now.”

Republicans railed against the legislation, calling it a federal intrusion into state voting operations aimed at giving an unfair advantage to Democratic candidates.

The Freedom to Vote Act contains an array of proposals to establish nationwide standards for ballot access, aiming to nullify the wave of new restrictions in states. It would require a minimum of 15 consecutive days of early voting and that all voters are able to request to vote by mail; it would also establish new automatic voter registration programs and make Election Day a national holiday. It is a narrower version of legislation that Democrats introduced early last year but revised to suit Mr. Manchin, who said the original bill was overly broad and insisted on including a provision requiring voters to present some form of identification.

A second measure named for Representative John Lewis, the civil rights icon and former congressman who died in 2020, would restore parts of the landmark Voting Rights Act weakened by Supreme Court rulings. Among the provisions was one mandating that jurisdictions with a history of discrimination win prior approval — or “preclearance” — from the Justice Department or federal courts in Washington before changing their voting rules.