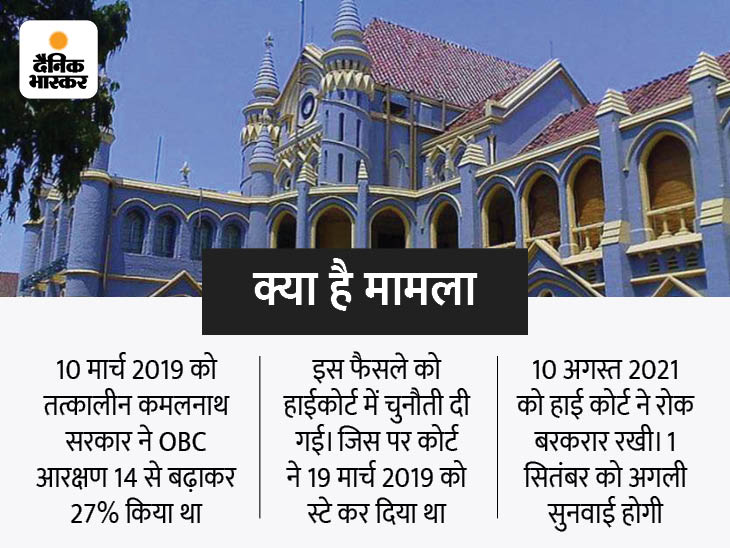 Chief Minister Shivraj Singh Chouhan has called a meeting in Mantralaya on Thursday regarding OBC reservation. Backward class ministers Mohan Yadav, Kamal Patel, Ramkhelawan Patel, Bharat Singh Kushwaha and MLAs will attend. Senior lawyers of Delhi including Advocate General Purushendra Kaurav have also been called in the meeting. It is clear from this, the government will decide the further strategy on the issue of OBC reservation in the meeting.

In fact, politics has heated up in Madhya Pradesh for giving 27% reservation to Backward Classes (OBC). After a heated argument between the Congress and the BJP in the House during the Monsoon session of the Vidhan Sabha, now both the major parties are working on a new strategy regarding this issue. On one hand, Congress is preparing to hit the road by making it a weapon. On the other hand, BJP is trying to reach out to this class through the government.

Ministry sources say, the manner in which the Congress has raised the issue of OBC reservation. The government has taken this seriously. The Chief Minister attacked the Leader of Opposition in the Assembly and State Congress President Kamal Nath. It was clear from the tone with which Shivraj was surrounding the opposition on this issue that the government wants to reach some conclusion, so that the Congress can be pushed on the back foot.

Sources say, since the matter is now in the court, in such a situation, the government can increase the annual limit of creamy layer from 8 lakh to 12 lakh at present for about 55% of the population of this class. Last month, when the High Court had stayed the decision of the then Kamal Nath government to increase the OBC reservation from 14 to 27%, the Chief Minister discussed raising the creamy layer limit in a meeting of the BJP Backward Classes Front.

Meeting held in CM House
Before the assembly session on the issue of 27% reservation for backward classes, Chief Minister Shivraj Singh Chouhan has had an important meeting with the leaders of this class in the CM House. BJP’s backward class ministers, MLAs, MPs and office-bearers of Backward Classes Morcha participated in it. State Government Advocate General Purushendra Kaurav was also present in the meeting held at CM House. Then in the meeting the leaders of OBC category were made aware of the legal aspects of 27% reservation.

what is the matter
In 2019, the then Kamal Nath government had brought a bill to give 27% reservation to the backward classes, but the High Court immediately stayed the decision. After this, only 14% reservation is being given to OBCs in the state. Recently, Leader of Opposition and Congress President Kamal Nath surrounded the current Shivraj government for not getting 27% reservation for OBCs.

It was alleged on behalf of the Congress that the government was not properly defending the reservation in the court. BJP became active to counter this. Now this allegation is being made by BJP, Congress had brought the bill of reservation only for vote bank. CM Shivraj himself had said on Tuesday, the Kamal Nath government had not submitted the reply in the court on time, so the court had stayed it.

High Court will hear on September 1
Let us inform that on Tuesday, the Madhya Pradesh High Court heard the matter of giving 27% reservation to the OBC category. The High Court has upheld the order of the government regarding OBC reservation. The next hearing of the case will take place on September 1.

All three women were sitting with bags at the bus stand, after searching the narcotics found in the bag, are residents of Punjab |...