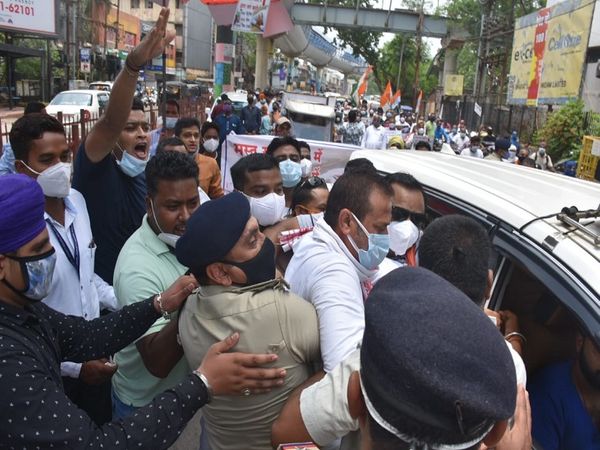 In Raipur, the police stopped the other protesting Congress leaders, including the parliamentary secretary, going towards the BJP office by pushing the car.

Congress continues to protest against the rising prices of diesel-petrol. Today the State Congress performed simultaneously across the state. In Raipur, Congress workers pushed cars and bikes from Ghari Chowk towards the BJP office at Rajbandha Maidan. He said, they will come by handing it over to the top leaders of the state BJP. On the way, the police stopped them.

Congress leaders-workers gathered at Ghari Chowk under the leadership of Parliamentary Secretary Vikas Upadhyay. The protesters raised slogans of ‘Mast Ram Masti Mein Aag Lage Basti Mein’. After that, dragging the bike and pushing the car proceeded towards the BJP office. In front of the Lalganga shopping complex, the police stopped the protesters from moving forward. After a brief scuffle, the protesters withdrew. During this, slogans against the policies of the BJP and the central government continued for a long time.

The convoy of Congress protesters had left with such slogans from Ghari Chowk in Raipur.

Vikas Upadhyay said, there was a time when the price of petrol increased by a few paise, Dr. Raman Singh used to protest against cycling with the entire cabinet. If the price of petrol reaches Rs 100 today, there is no protest. Vikas Upadhyay said, the Central Government has earned 26 lakh crore profit at the cost of the people. On the other hand, the people of the country are suffering from the financial crisis they are facing during the transition period from lockdown and have come to that situation that the bike is being dragged. Which is responsible BJP.

In Raipur, Congress workers pulled bikes and scooters by tying them with ropes.

“The expensive witch is eaten” played simultaneously across the state

The demonstration of Congress took place in other parts of the state as well. The party played the song “Mahagai daayan khaye jaata hai”, by installing loudspeakers on campaign vehicles. He also narrated the speeches of Prime Minister Narendra Modi with him. State Congress Chief Spokesperson Sushil Anand Shukla said that State Congress President Mohan Markam participated in the demonstration of Kondagaon. Congress has demonstrated today in about three thousand wards and more than 307 organization blocks of 27 district headquarters of the state. Listening to the audio of Prime Minister Modi’s speeches against inflation, told how opportunistic the BJP and its leaders are. Congress leaders said that before coming to power, BJP leaders used to curse inflation, after coming to the government, they are working to increase inflation by providing tax and shelter to hoarders.

In Kondagaon, state president Mohan Markam himself got down on the road riding on an auto rickshaw.

Modi’s speech in the campaign of Congress

Prime Minister Narendra Modi’s speeches during the protest today, which Congress used as a weapon, also includes the speech in which the Prime Minister is asking people in a public meeting whether inflation should be reduced or not. Apart from this, “Prime Minister, whether you reduce inflation or not, do at least as much as Atal Vihari Vajpayee had left.”, “It is the responsibility of the central government to reduce inflation or not.”, “First poor dry Used to eat roti, now he is eating two or two vegetables, so inflation has increased. and excerpts from speeches such as “They have lost control over the system of government”.

Congress has prepared for a unique performance on Friday. It will be a five-minute flyover. Congress is telling the people that on June 18 at 12 noon, stop wherever they are for 5 minutes. Resist inflation with this wheelbarrow.

Demonstration across the state on June 20

Mahila Congress has decided to protest across the state on June 20. This demonstration against the central government regarding inflation will be virtual. Congress, Youth Congress and NSUI are already running separate agitations on this issue.