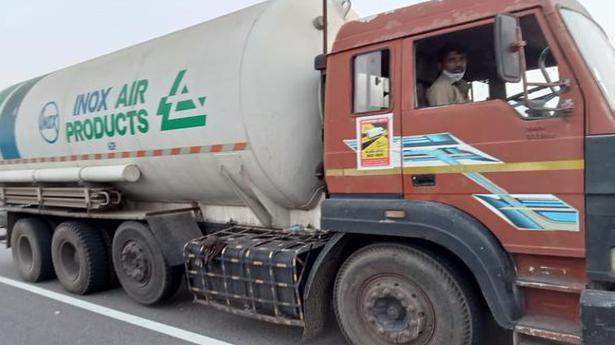 
Ferrying thousands of passengers in city buses for years was a different experience than bringing in oxygen tankers from Odisha, say drivers of the State Road Transport Corporation, who drove back the tankers carrying medical grade liquified oxygen to the State. Oxygen, also called gold these days, to save thousands of lives during the pandemic.

On Thursday night, 10 experienced TSRTC drivers from the Greater Hyderabad Zone were hand-picked to drive back the tankers loaded with liquid oxygen from Angul, Odisha. They were taken to Begumpet Airport, and on Friday morning flown in two Indian Air Force transport aircraft along with the empty tankers to Odisha.

On Tuesday the RTC sent eight more drivers to fly along with empty oxygen tankers to bring in liquid oxygen from Odisha.

“They were mobilised in a span of one hour. Our drivers have done a great service to society by getting oxygen tankers to save thousands of lives in Hyderabad and across Telangana,” TSRTC Managing Director Sunil Sharma told The Hindu.

M. Babaiah, who on a regular day drives suburban service 218 (Koti-Patancheru-Koti), drove the liquid oxygen tanker for more than 18 hours and reached Hyderabad on Monday evening.

“My family and I are proud to serve society in this way. We had no time to waste, so drove the vehicle continuously and reached the city on time,” he said.

“Until we reached the city, I forgot the meaning of sleep. I was transporting a precious material which saves the lives of many,” 45-year-old Babaiah, who works at Musheerabad-I depot said.

Another driver, P. Narender, who boarded a flight for the first time ever, said that he was happy to help society in saving human lives during the pandemic.

“The journey from Angul to Hyderabad gave me immense satisfaction, both personally and professionally,” he said.

As the tanker company driver reported sick on Thursday, Mr. Narender along with N. Malla Reddy, an RTC driver from Midhani depot, drove back the oxygen tanker to the city.

All the drivers, who were sent to Angul, had experience of driving vehicles carrying hazardous material before joining the Corporation.