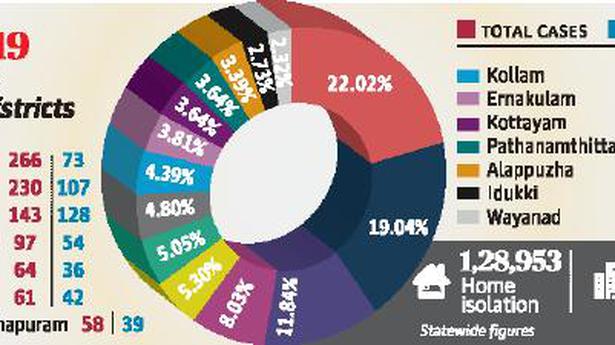 The district administration is gearing up to handle any emergency if the COVID-19 situation goes out of control. Having got 128 cases under treatment, Palakkad district has at present the largest base in the State with Ottappalam taluk remaining a potential hotspot.

The administration has identified the high-risk areas and is preparing to impose a total curfew if the number of cases continues to spike. Ottappalam taluk has dozens of cases. Kadambazhipuram, Sreekrishnapuram, and Ambalapara grama panchayats and Ottapalam municipality have been identified as most vulnerable for a potential flare-up.

“We are only sending warning signals now. If people behave well by complying with the norms, there will be nothing to worry. Otherwise, it can turn out to be disastrous,” District Collector D. Balamurali told The Hindu.

He said the high number of cases being reported every day should not be considered as a bad omen. “Identifying and isolating infected people are a good thing for the community. If the infected people go unidentified, the end result can be disastrous,” he said.

All but six of the 128 patients in Palakkad have people who returned either from other States or from abroad. Health authorities said six cases were family members of the infected returnees. And the secondary infection rate in the district is almost zero.

So far, the district has reported no COVID-19 death. “If people don’t take the alerts seriously and start misbehaving, then the situation can go out of our hands,” said Mr. Balamurali.

Curfew in large areas will not be viable any more. The district administration has prepared charts and maps to pin down the specific areas of concentration in the case of a flare-up.

Additional District Magistrate T. Vijayan said they had increased the number of daily tests as part of taking on COVID-19. More tests and more identification would help the administration and the people to exercise enhanced vigil, Mr. Vijayan said.

Trump asks newspapers to give up Pulitzer Prize for Russia coverage

Disasters of 13 journalist and author mothers; She says – After...