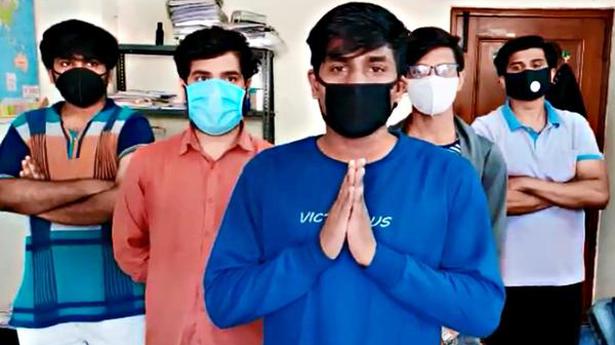 Nearly 200 students from Karnataka, who are in New Delhi for civil service coaching, are stranded due to the lockdown and are frantically trying to return to their native places.

Most of them are civil service aspirants residing in the IAS coaching hub of Karol Bagh and New Rajendra Nagar and have completed their annual coaching classes and want to return home as the civil service examinations have been put off.

But they allege that applications of almost all, barring a handful of students, have not been considered for returning home when they uploaded their details on the Karnataka government’s online forum.

They also alleged that their efforts to reach out to the nodal officers from Karnataka who are in-charge of New Delhi have not yielded any results.

Speaking on behalf of stranded students, Kavana Gowda J., a student from Bengaluru, said their efforts to seek New Delhi government’s help too did not materialise as the authorities advised them to contact the home State government.

“All of us are staying here in different rooms or apartments on a twin/triple sharing-basis. It has become difficult to spend even a day here as it is tough to source groceries and other essentials. There is no point continuing here as the libraries too are closed,” she said.

Also, it has become financially tough for many students, who have completed their coaching schedule, to continue to stay in New Delhi. “Each of us spend anywhere from ₹7,000 to ₹8,000 a month on rent alone,” she said, appealing to the Karnataka government to help them return home.