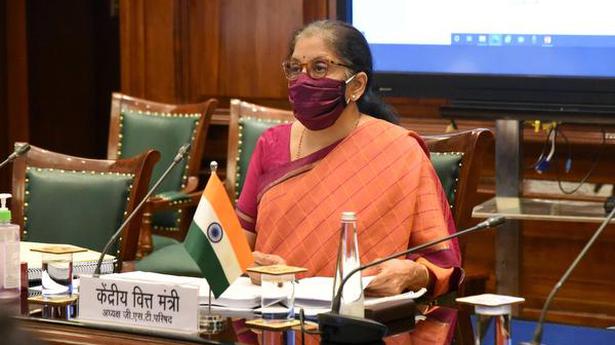 
Employers and workers could seek the help of Labour Department authorities and trade unions to reach a settlement. The court highlighted that the government, too, had an obligation to ensure conciliation between private employers and their workers for the smooth running of industrial establishments.

GST collections in the past two months have only reached 45% of the target amount, Finance Minister Nirmala Sitharaman said on Friday. Given the shortfall in revenue, the council will meet again in July to discuss the issue of compensation cess and dues to States, and the possibility of borrowing money from the market to meet these dues.

India and China held another round of Major General-level talks on Friday to resolve the standoff on the border in Ladakh. Meanwhile, in New Delhi, Defence Minister Rajnath Singh held another review meeting on the progress of these ground level talks with the Chief of Defence Staff (CDS) and the three Service Chiefs, sources said.

The Supreme Court on Friday took strong exception to lack of infrastructure and salary cuts for the saddled government and private medical staff, warning the government that “you do not want dissatisfied soldiers in the war” against the COVID-19 pandemic.

A report authored by a senior figure at an influential Chinese think-tank has linked the current tensions along the Line of Actual Control (LAC) to India’s move last year to abrogate Article 370 and change the status of Jammu and Kashmir, a decision that China had voiced opposition to.

To ensure that farm hands are available for timely sowing, the farmers in Punjab are offering a hike in wages over last year’s remuneration, besides facilitating travel from their native places, along with free accommodation and food. Some are even offering liquor as an added incentive.

As educational institutions across the country switched to online classes following the lockdown, students across large swathes of the Northeast wait in hope for their mobile phone handsets to come alive or catch the signal long enough to keep pace with their more fortunate counterparts, reports Rahul Karmakar

The Supreme Court on Friday asked the Ministry of Finance and the Reserve Bank of India (RBI) to hold a detailed joint meeting in the next three days to clear the air on whether the deferment of loan interest in place to help borrowers through their financial crisis during the national lockdown will lead to accrual of further interest once the freeze is lifted after August 31.

The Special Operations Group (SOG) of the Rajasthan police will investigate the allegations of poaching of Congress MLAs in the State following alleged online transfer of huge amounts of money. The Anti-Corruption Bureau is already seized of the matter after a complaint was filed seeking action against those trying to topple the State government.

Brazil’s COVID-19 death toll overtook Britain’s on June 12 to become the second highest in the world with 41,828 dead, but the World Health Organization said the nation’s health system was standing up to the pressure.

Beijing closed two markets on Friday and delayed the return of primary school students after three fresh COVID-19 cases emerged in the capital — the first after two months of no infections in the city.

Both engagements — three ODIs and three T20Is in Sri Lanka and three ODIs in Zimbabwe — were a part of the Future Tours Programme (FTP), which is likely to be revised when the International Cricket Council’s Board meets next week.