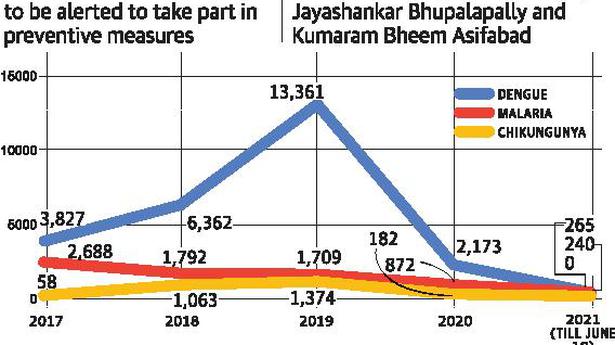 Along with joy and much needed respite from summers, monsoons also means increased menace of mosquitoes – which breed in stagnant water. This poses a threat of increase in spread of vector-borne diseases such as dengue, malaria and chikungunya.

To avoid it, staff of Telangana Health Department were directed to identify high-risk area where high number of the vector-borne diseases were reported last year. Preventive measures will be taken based on that. Local bodies such as panchayats and municipalities too will be alerted to take part in the preventive measures.

A few of the high-risk areas are in Bhadradri Kothagudem, Mulugu, Jayashankar Bhupalapally and Kumaram Bheem Asifabad.

Some of the preventive measures include indoor residual spray, release of Gambusia fish in stagnant water bodies, urging people to ensure water does not stagnate in empty or broken vessels, in tyres lying around home, or any other container. The stagnant water works as breeding ground for mosquitoes.

Since summers gave way to monsoons, people discontinue usage of air coolers. People were urged to clear remaining water from the coolers.

Additional Director at National Vector Borne Disease Control Programme (Telangana), Dr G Amar Singh Naik said that active and passive surveillance of malaria is being taken up. The staff would visit high-risk areas. Medical camps would be conducted there for early detection and treatment of the vector-borne diseases.

He said that private hospitals were directed to send samples to sentinel site hospitals to cross check dengue status of patients.

“NS1 ELISA test will be performed if it has been within five days from onset of fever.

And MAC ELISA test will be performed if it has been more than five days,” Dr Amar Singh said.

This holds significance since earlier a few private hospitals started to administer treatment after declaring that a person had dengue. However, the person was found not to have the disease when cross checked.

Besides, directions were issued to ensure blood smear test is used in detection of malaria, which is considered as gold standard for diagnosis of the diseases. Rapid detection tests are to be used at Primary Health Centres only in emergency situations.

From January to June 10 of 2021, 265 dengue and 240 malaria cases were recorded. Since people have become conscious about personal and immediate environment hygiene in the wake of COVID, it is hoped that load of the cases will be less this year too.

There could be increased focus on the diseases as the State’s Director of Public Health Dr G Srinivasa Rao said on Monday that elimination of malaria by 2025 is a target.

The senior official also said that Chief Minister K Chandrasekhar Rao recently held a meeting with District Collectors and others on seasonal diseases.

Apart from the vector-borne diseases, air borne diseases too is under focus. As the State is already burdened with COVID-19 cases, officials are taking steps to avoid people getting infected with other diseases.

Dr Srinivasa said that precautionary steps such as wearing masks, physical distancing, hand hygiene, followed to avoid COVID-19 also helps in avoiding other air-borne diseases such as tuberculosis. Other officials in the Health Department said that the measures were one of the reasons for less number of swine flu cases from 2020.