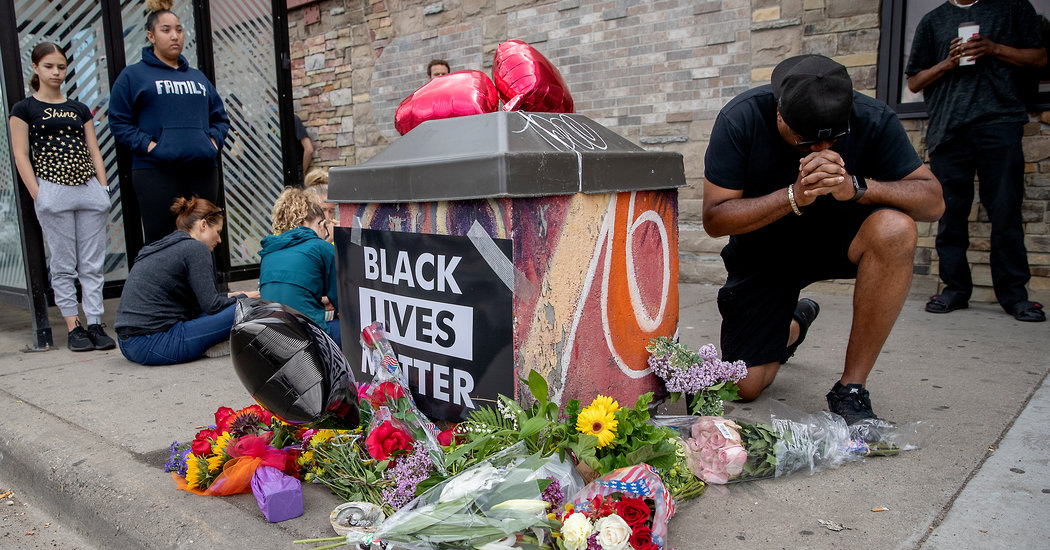 The Minneapolis police statement was short and sanitized. An allegation of forgery. A suspect who “appeared to be under the influence,” who “physically resisted officers” and who appeared to be “suffering medical distress.”

The video that emerged hours later told a dramatically different story. It showed a police officer pressing his knee into the suspect’s neck until he appeared limp and unconscious. Throughout the encounter, the man, George Floyd, could be heard saying “I can’t breathe” again and again. He later died at a hospital.

The explosive footage of Mr. Floyd, 46, taken by a bystander and shared widely on social media early Tuesday, sparked community outrage, an F.B.I. civil rights investigation and the firing of the police officer and three colleagues who were also at the scene. “Every bit of what I saw was wrong,” Jacob Frey, the mayor of Minneapolis, said in an emotional interview with reporters on Facebook Live shortly after announcing that the officers had been fired. “It was malicious. And it was unacceptable. There is no gray there.”

The video clip laid bare, once again, a phenomenon of the cellphone era: official police versions of events that diverge greatly from what later appears on videotape.

This year alone, video recordings have altered the official narratives of numerous encounters, raising the question of what might have occurred had no cameras been around.

In Georgia, three white men were charged with murder after chasing Ahmaud Arbery, who had been jogging, through a neighborhood near Brunswick and then shooting him. Charges were not filed for months, and the initial police report repeated the account of one of the men — a retired law enforcement officer — that Mr. Arbery was pursued because he was suspected in a rash of break-ins.

Surveillance videos later showed Mr. Arbery walking into a house that was under construction but not taking anything. And a video of the fatal encounter was so horrifying it drew international outrage and increased pressure on the authorities to press charges against the man who fired the fatal shots; his father, who had participated in the chase; and the neighbor who filmed the video, who had joined the pursuit in his own vehicle.

In an example of a video raising questions about the police narrative, a police officer in suburban Sacramento was caught on a videotape last month punching a 14-year-old boy several times while arresting him. The police news release of the encounter acknowledges the existence of a video but does not specifically mention the punches. It describes the boy as “physically resistive” and says the officer “attempted to maintain control of the juvenile without his handcuffs and while alone.”

Videos of police interactions with civilians, whether captured by the people involved or bystanders, now act as a central witness, often challenging official accounts.

“There’s been enough incidences and evidence that show that too often police don’t tell the truth about what really happened,” said Nekima Levy Armstrong, a civil rights lawyer in Minneapolis. “And the public has a right to know the truth. It undermines public trust when we find out that law enforcement officials have covered up the truth.”

Minneapolis police said they were investigating an allegation of forgery on Monday night in the southern part of the city. They confronted a man who was sitting on the top of a blue car. The police said the suspect had “physically resisted officers” as he was placed in handcuffs. He appeared to be “suffering medical distress,” according to the police statement released on Monday night after an ambulance was called to the scene.

But hours later, a 10-minute video taken by a bystander was posted to Facebook, showing a different story than the first police statement or the subsequent update. Neither mentioned what was apparent in the video: a white police officer kneeling on the black man’s neck for several minutes as bystanders and the man himself pleaded for the officer to stop.

Even after the man, later identified as Mr. Floyd, appeared unconscious, the officer did not release the pressure until paramedics arrived. By then he was motionless.

“Please, please, please I can’t breathe. Please, man,” Mr. Floyd, who worked as a security guard at a local restaurant, said at one point.

Mayor Frey said he was unsure how the inaccurate initial police statement came to be.

“I think it’s important that we are absolutely as transparent as possible,” he said in a Facebook Live interview with North News, a community newspaper in North Minneapolis. “It’s the kind of thing where you don’t hide from the truth. You lean into it because our city is going to be better off for it.”

Police training typically dictates that officers should keep suspects on their stomachs while handcuffed as briefly as possible because that position can cause them to asphyxiate, said Seth W. Stoughton, a law professor at the University of South Carolina and former police officer.

“I just cannot fathom an officer in 2020 honestly saying, ‘Yes, I thought it was OK to keep him in that position for almost four minutes after he passed out,’” said Mr. Stoughton, an expert on the use of force. “That’s just mind-boggling to me.”

The encounter drew comparisons to the case of Eric Garner, a black man who died in New York police custody in 2014, after a white officer held him in a chokehold. Mr. Garner’s repeated plea of “I can’t breathe” — also recorded by a cellphone — became a rallying cry at demonstrations against police misconduct around the nation.

The F.B.I. is conducting a federal civil rights investigation into Mr. Floyd’s death, the Minnesota Bureau of Criminal Apprehension said in a statement. The state bureau also said that it was conducting its own investigation at the request of the Police Department, and that it would release its findings to the Hennepin County district attorney’s office.

“Being black in America should not be a death sentence,” Mr. Frey said in a statement. In his interview, he said the killing of Mr. Floyd and other black men “prematurely” was an unacceptable pattern.

“This is not just this one instance that we should be angry about,” he said. “These are repeated instances where black men have had their lives taken from them prematurely, yes in Minnesota and all around the country.”

The outcome of what happened over Memorial Day weekend in New York’s Central Park was far less serious on its face than the raw videotaped encounters that took place elsewhere. But the verbal dispute that has gone viral showed how even panicked calls to 911 are not always what they seem.

Christian Cooper, a black man who was bird-watching, asked a white woman, who was identified later as Amy Cooper, to leash her dog as required by park rules. That resulted in the woman calling 911 to report a nonexistent crime. She is captured on Mr. Cooper’s cellphone video saying, “I’m going to tell them there’s an African-American man threatening my life.”

Eliza Orlins, a public defender who is running for Manhattan district attorney, said 911 calls have led to some of her clients being held in jail, where being locked up for even a day can produce devastating results. People can lose jobs, homes or custody of their children while they sit in jail on unproven charges, she said.

“This isn’t this one woman or this unique thing — this is a systemwide problem,” she said. “I think it’s chilling when you listen to just the audio of her 911 call, and you think about how credibly someone like her would present in court. There are so many consequences.”

Police officers arrived a short time after the 911 call but did not issue any summonses or make arrests. Online outrage focused on what could have happened and who would have been believed without the video. Ms. Cooper, who publicly apologized on Tuesday, was later terminated from her job at Franklin Templeton, an investment firm.

“Videos paint a story inside of a culture where a lot of the public has been trained and encouraged to not believe black people,” said Rashad Robinson, president of Color of Change, the nation’s largest online racial justice organization.

[Race affects our lives in countless ways. To read more provocative stories on race from The New York Times, sign up here for our weekly Race/Related newsletter.]

Convincing win for Gokulam – The Hindu

know - April 1, 2021 0
Rahul leads a Punjab side that has the arsenal to win any battle, but it must seize the big moments more20 frequently Kings...

know - September 30, 2021 0
A small band of longtime AIDS activists, fed up with what they regard as President Biden’s failure to scale up coronavirus vaccine manufacturing for...

They Say Colleges Are Censorious. So They Are Starting a New One.

know - November 9, 2021 0
The founders of the University of Austin say they want to defend intellectual dissent, and declare that something in higher education is fundamentally broken. Source...

know - July 30, 2020 1
David Willey and Sam Billings guided world champions England to a six-wicket win over Ireland at Southampton on Thursday in the first one-day...