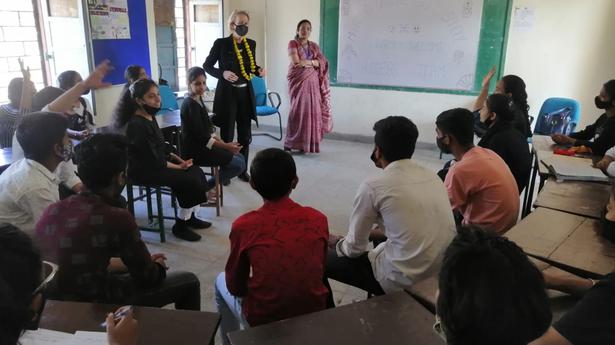 The science of fun, wonders of the sea, long ago and today and “good idea” are some of the lessons taught to the students selected from two schools here as part of a unique initiative to provide them with a foundation of English language skills. The programme seeks to enhance the capabilities of children and enable them to avail of educational and employment opportunities in future.

Twenty-five students each from the two schools, belonging to underprivileged families, have been selected for the English Access Microscholarship Programme run by the American Embassy’s Bureau of Education and Cultural Affairs.

After being taught in an online mode for more than a year, the students in the age group of 13 to 18 years will be shortly joining the after-school physical classes and intensive sessions.

American Embassy’s Regional English Language Officer Ruth Goode, accompanied by specialist Rachna Sharma, visited the schools here last week ahead of the launch of physical classes. Ms. Goode interacted with the students and obtained their feedback, while informing them of the scope for studying in the U.S. through the exchange programmes.

Gargi Mathur, Mohammed Sharik, Arjun Aswal and Upasna Goyar – students of Class IX to XII in Mahatma Gandhi Government English Medium School, Adarsh Nagar – told the visitors from the U.S. Embassy that the learning programme had boosted their confidence and helped them groom their personalities.

The other educational institution in the Rajasthan capital which has joined the programme is Vimukti Girls’ School, providing education free of cost to girls from low-income families living in urban slums.

The students, who had the first in-person interaction with Ms. Goode and Ms. Sharma, were delighted to learn about the U.S. Embassy’s english courses run in India, Bhutan and Afghanistan.

Lalit Parihar, coordinator of New Delhi-based Learning Links Foundation, which is implementing the programme, told The Hindu that the foundation had approached the Samagra Shiksha Abhiyan authorities in the State to explore the scope for launching the initiative in other towns across the State.

“A recent achievement of a student from Shimla, who has gone to the U.S. for higher studies, will serve as an inspiration for children in Rajasthan,” he said.

Ms. Bano said such a project was the “need of the hour” in view of the language barriers faced by the students of government schools, mostly coming from a poor background.

The flagship access programme’s teacher in Jaipur, Anitha Rajamohan, said the physical classes would be held after the regular school hours with the adoption of a communicative approach to teaching english. “The online classes have already infused a spirit of participatory learning among the children. They have improved drastically and hold the potential for winning scholarships for study in the U.S.,” she said.

The students will also be selected for attending the South Asian meets, where they will be exposed to the educational atmosphere in India’s neighbouring countries. The global microscholarship programme is operative in as many as 90 countries, where an assistance is provided for development of curriculum, textbooks and English as a Foreign Language (EFL) teaching methodology.

The learning material provided to the students in Jaipur has laid emphasis on content creation by writing unified paragraphs, developing vocabulary with the talks about hobbies, interests and people, using visuals to support comprehension, identifying sequence of events, asking questions and understanding the cause and effect of natural phenomena.