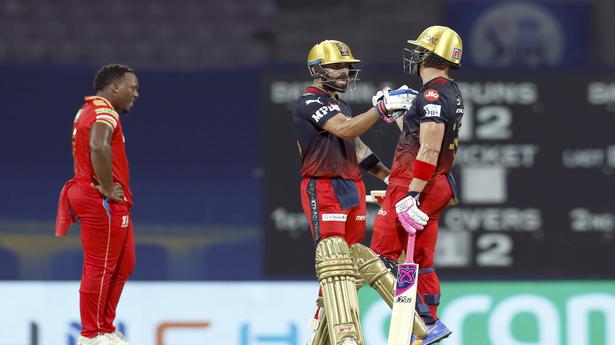 He may have been wearing a non-Chennai Super Kings jersey for the first in the Indian Premier League. He may have been leading an IPL franchise for the first time. But all the external and psychological factors didn’t matter to Faf du Plessis, the batter, as the veteran’s sensational hitting in the latter half meant Royal Challengers Bangalore had a near-perfect outing in its IPL 2022 opener versus Punjab Kings.

Had it not been for Shakrukh Khan’s stunning catch running in from long-off in the 18th, du Plessis was well on course to notch up the first century of IPL 2022. However, Shahkrukh had little to celebrate, having dropped a regulation catch at midwicket in the fourth over when du Plessis was on seven.

In fact, even after the reprieve, du Plessis appeared to have been tentative in his new avatar. Despite Kohli getting off to a flier after youngster Anuj Rawat’s cameo in the Powerplay, du Plessis looked tentative.

As a result, RCB was 78 for one after 11 overs, with the captain on 23 off 34 runs. The next seven balls du Plessis faced fetched him 28 runs as he celebrated his fifty with successive paddled sixes off Odean Smith, who was deprived of the Protean’s wicket in the Poweplay.

The next over saw sixes continuing to rain as Kohli – who had earlier danced down the wicket to send Brar sailing into the sight-screen – followed up with another six after du Plessis’ back-to-back maximums.

In three overs, RCB had added 58 runs and the stage was set for a perfect finish. Despite du Plessis falling short of a hundred, Karthik and Kohli provided the perfect finish as RCB added 61 runs in the last five overs.

China’s silence on border, a contrast to Doklam

know - May 26, 2020 0
China’s government and media have maintained a studied public silence on developments along the Indian border through much of the past week, in...

know - January 22, 2022 0
WASHINGTON — In celebrating a $20 billion investment by Intel in a new semiconductor plant in Ohio, President Biden sought on Friday to jump-start...

know - July 7, 2022 0
London : Boris Johnson's term as prime minister ended on Thursday in one of the biggest ups and downs in British history. He...

know - June 4, 2022 0
Dhaka : A top leader of the opposition BNP in Bangladesh has threatened Prime Minister Sheikh Hasina of a "repeat of 1975", referring to...

Gwalior News In Hindi : Liquor shops will not open till High court’s decision,...