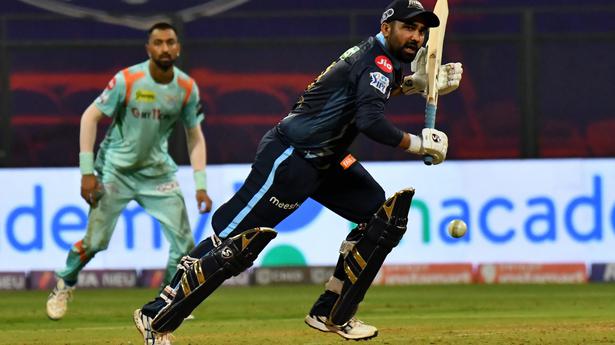 Rahul Tewatia blasted an impactful 40 off 24 balls after Mohammad Shami’s sensational new ball spell to set up a five-wicket win for Gujarat Titans against Lucknow Super Giants in the battle of IPL debutants in Mumbai on Monday.

Deepak Hooda (55 off 41 balls) and Ayush Badoni (54 off 41 balls) smashed quick-fire half centuries to help Super Giants recover to a respectable 158/6 after Shami (3/25) blew away their top-order.

Needing 68 off the last 30 balls, Titans were up against it but Tewatia (40 not out), David Miller (30 off 21) and IPL debutant Abhinav Manohar (15 not out off 7) pulled off a memorable win for their team with two balls to spare. In pursuit of 159, Gujarat were down and out at 78/4 before Miller and Tewatia forged a match-winning 60 run-stand off just 34 balls.

They were brutal on Deepak Hooda, as they fetched 22 runs in the 16th over, with each hitting one six and one four. And then Tewatia hammered a six and two fours in the next over, where Gujarat amassed 17 runs, to bring down the equation to 29 from 18 balls.

Avesh removed Miller in the 18th over to raise his side’s hopes, but Manohar and Tewatia, who hit five boundaries and two maximums, saw the team home.

Earlier, Hooda and IPL debutant Badoni, who had endured plenty of struggles in the past three years, took Super Giants to a respectable score after Shami reduced them to 29 for four.

But then Hooda (55) and Badoni (54), took the onus on themselves and resurrected the Lucknow innings with an 87-run-stand off 68 balls. Hooda struck six fours and two sixes in his 41-ball knock while Badoni hammered four boundaries and three maximums in his 41 ball innings.

After Hooda was trapped in front of the wicket by Rashid Khan (1/27) in the 16th over, Badoni, who is a product despite the system, upped the ante and played shots at will. Badoni hit the likes of Rashid Khan and Lockie Ferguson for a six and that should stay in his memory for life.

Lucknow lost captain KL Rahul (0) on the first ball of the game as Shami had him caught behind with a beauty. PTI Shami then cleaned up Quinton De Kock (7), who missed a drive, in the third over as Lucknow was reeling at 13/2.

Lucknow were in all sorts of trouble at 20/3 as Evin Lewis (10) was dismissed, courtesy a stunning catch by Shubman Gill in the deep off pacer Varun Aaron (2/45).

Shami got his third wicket, after he castled Manish Pandey (6) with a ball that seamed back in after pitching on the fourth stump.

It was the first-time Shami took three wickets in the power-play in the IPL. After six overs, Lucknow were reeling at 32/4.

Then it was the Hooda and Badoni show.

Hardik Pandya, playing his first game since the T20 World Cup last year, conceded 37 runs in four overs. Badoni went after him in his final over that went for 19 runs

know - February 16, 2022 0
Ranked No. 10 in the world, the mixed doubles pair is keen to move further up the ladder and the duo has roughly planned...

How SMBs can overcome business continuity challenges during the coronavirus pandemic

know - March 23, 2020 0
COVID-19 is forcing SMBs to evaluate their remote work capabilities and security. These tips and...

know - October 14, 2021 0
A Texas judge strongly recommended this week that a convicted murderer on death row be granted a new trial because of the blatant racism...

Columnist News In Hindi : Greed and globalization have made us responsible for Kovid-19...