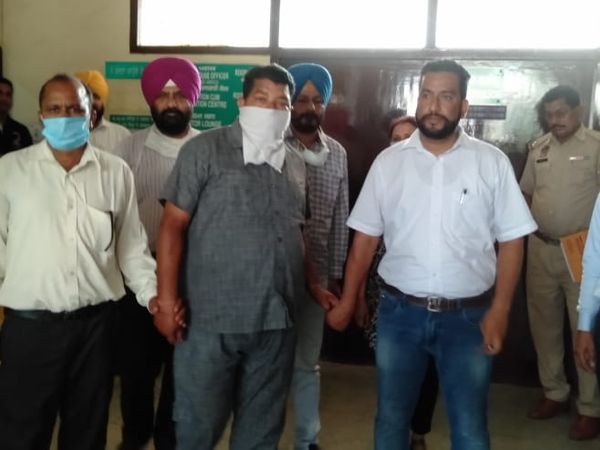 Vigilance team takes away the bribery sub-inspector of Punjab Hemguard.

The team of Vigilance Bureau arrested the Sub Inspector of Home Guard, who was demanding bribe, despite the Home Guard jawan being on duty. 5 thousand rupees were also recovered from him as bribe. A case has been registered against the accused sub-inspector under the Anti-Corruption Act.

Used to put absenteeism on the day of rest, demanded service-water in return

of Vigilance Bureau SSP Daljinder Singh Dhillon said that Major Singh, a resident of Sangowal, does duty in Punjab Home Guard in Jalandhar district. When he was rested after doing duty, Shahkot’s sub-inspector (Punjab Home Guard) Jagir Singh used to make him absent. Major did not know about this. He would know this when he went back to duty. When Major Singh would ask SI Jagir Singh about this, he used to say that if you want to take full salary, then you have to do service and water.

Called after getting one month’s salary

He remained on duty at Shahkot police station from May 1 to May 31, but Jagir Singh said that he was absent. If you want your full salary then give a statement in writing. Major Singh did not give any written statement. After this Jagir Singh himself wrote the application on his behalf and got Major Singh signed. After this, he called him and said that his entire salary for the month of May has been deposited in his bank account.

Demanded 5 thousand in lieu of full salary from now on, Vigilance caught the trap

If you want to take full salary after completing your attendance from future, then give a bribe of 5 thousand. After this the Major returned promising to give him the money. After this he complained to the Vigilance. After which a team was formed under the leadership of Inspector Rajwinder Kaur. Who arrested Sub Inspector Home Guard Jagir Singh red-handed taking bribe in the presence of witnesses.

Lucknow News In Hindi : There is also a village in UP, named Corona;...

know - September 16, 2022 0
Moscow: President of Russia Vladimir Putin on Thursday praised China's balanced position on the Ukraine war. However, he also acknowledged that China had...

know - May 22, 2020 0
The International Cricket Council’s Nominations Committee is set to formalise the election procedure for the post of chairman at a meeting on May...

know - May 13, 2022 0
Washington : A woman claims that she has two vaginas in her body. This very rare condition allows her to have two periods...

Global chip shortage: Where to buy used laptops and other office tech online

know - May 28, 2021 0
New tech gadgets are in high demand and limited supply as consumers and companies alike...