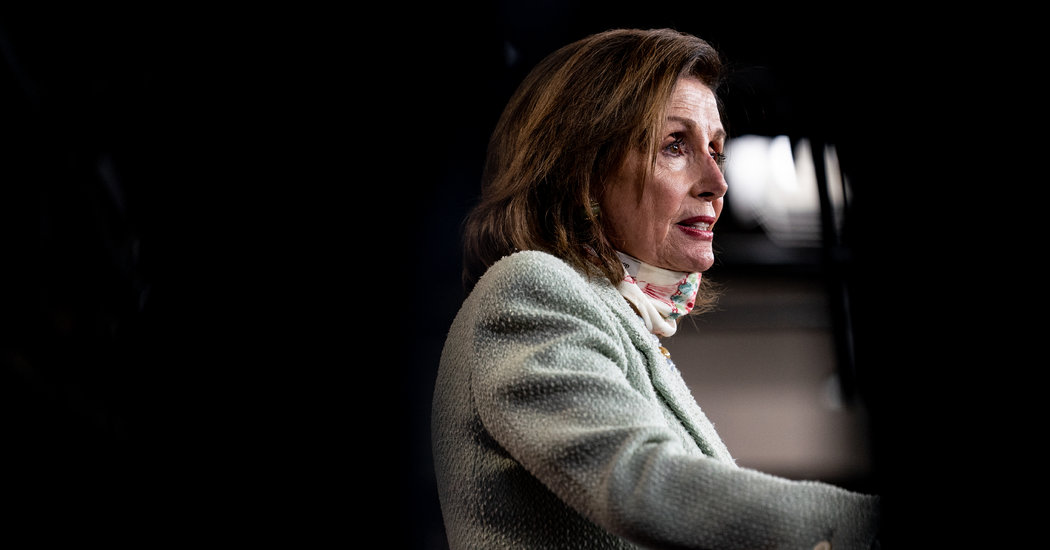 The retreat left uncertain the fate of efforts to overhaul national security surveillance while extending three partly expired tools that federal law enforcement officials use in such cases. Just days ago, the bill had appeared poised to become law, after initial approval by both the House and Senate.

But support for the measure among Republicans cratered after Mr. Trump intervened to urge them to reject it, and some progressives said they could not support the bill without greater privacy protections. With votes bleeding from both flanks, House leaders delayed a vote late Wednesday and then called if off altogether on Thursday rather than let it fail.

Speaker Nancy Pelosi, who had spent much of the last 24 hours trying to salvage the measure, instead directed the House to initiate negotiations with the Senate to bridge their differences before trying to clear it for Mr. Trump’s signature. Lawmakers voted 284-122 to start the talks, but senators will have to approve the move as well before they can begin.

“Clearly, because House Republicans have prioritized politics over our national security, we will no longer have a bipartisan veto-proof majority,” she said in a letter to colleagues on Thursday morning. She said a conference between the two chambers would “ensure that all of the views of all members of our caucus are represented in the final product.”

It is far from clear what the Trump administration wants. Mr. Trump himself has demonstrated little understanding of the complex details of the Foreign Intelligence Surveillance Act, or FISA, and appears to be largely interested in keeping alive his grievances about the F.B.I. investigation into whether his campaign was involved with Russia’s efforts to interfere in the 2016 election.

He tweeted on Tuesday that Republicans should oppose the legislation “until such time as our Country is able to determine how and why the greatest political, criminal, and subversive scandal in USA history took place!” On Thursday, he praised Republicans for following through with an “incredibly important blockage” of legislation that would “perpetuate the abuse.”

A small part of the Russia investigation included surveillance authorized by FISA that targeted Carter Page, a former campaign adviser with close ties to Moscow. An inspector general report later uncovered myriad errors and omissions in the applications for that wiretap, and Mr. Trump has sought to undercut the legitimacy of the broader inquiry by citing the problematic wiretapping of his former aide.

That kind of FISA surveillance, however, is unrelated to the trio of partly expired F.B.I. tools whose proposed extension is driving the legislation. They do things like permit court orders to gather business records deemed to be relevant to a terrorism or espionage investigation.

Still, the bill before Congress to extend them has become a vehicle for broader FISA reforms, including in response to the problems with the Page applications. For example, it would add new layers of oversight to FISA wiretap applications by instructing judges — who normally hear from only the Justice Department when weighing such requests — to appoint outsiders to critique the government’s arguments in more types of cases, including those involving political campaigns or religious organizations.

But even as Mr. Trump vents his skepticism of the government surveillance powers, Attorney General William P. Barr has been pushing Republicans in the opposite direction. He warned on Wednesday that he would tell Mr. Trump to veto the bill because he thought it would impose too many restrictions on law enforcement and national security authorities.

The result is a complicated spectacle of political and policy dysfunction. Traditionally, Democrats have tended to be somewhat more reluctant than Republicans to grant broad national security powers to the government; but here, Democrats appear to be the ones more eager to see the legislation passed.

That is in part because some Republicans, like Mr. Barr, would apparently rather see the tools remain expired than accept the new limits included in the bill. The operational effect of the expiration is limited, because it only matters for potential investigations into new threats that may emerge. The F.B.I. can still use the authority to obtain court orders for ongoing cases, and it has open-ended investigations into major adversaries like the Islamic State, Russia and China.

But it is also because Mr. Trump is now suggesting that the reforms on FISA wiretaps do not go far enough, although he has not put forward any alternative. That has left it unclear what congressional Republicans actually want for the bill, other than to avoid getting crosswise with Mr. Trump.

Unlike most other legislation that becomes law in Washington, surveillance bills in recent years have tended to pass with unusual bipartisan coalitions that must balance the interests of civil libertarians in both parties with those of more pro-law enforcement lawmakers in both parties. When the House passed an earlier version of the bill in March, for example, 152 Democrats and 126 Republicans supported it.

Republican leaders in the House, many of whom have publicly praised the measure in recent days, quickly stepped into line behind the president and urged their colleagues to vote “no” so that lawmakers and the White House could reopen negotiations. They offered vague statements about the bill’s inadequacies, even though several had urged the president to sign it as recently as this month.

“In moving forward today, it won’t be signed into law,” Representative Kevin McCarthy, Republican of California and the minority leader, said on Wednesday. “The president has questions, and the attorney general has questions. Let’s take a deep breath and go back and work together.”

Democrats faced their own opposition from the left, with the leaders of the influential progressive caucus warning that the bill before them was “far too narrow in scope and would still leave the public vulnerable to invasive online spying and data collection.”

The setback was the latest obstacle in what has proved to be a tortuous effort this year to overhaul federal surveillance powers. The House initially approved the bill in March, but the Senate modified it this month, sending it back to be passed again before it could go to Mr. Trump to be signed into law.

House Democrats had planned to further revise it this week by tightening limits on when the F.B.I. might collect Americans’ internet browsing and search records. But Ms. Pelosi canceled those plans after civil libertarian-oriented lawmakers and privacy advocates expressed disillusionment with the scope of the changes.

Before passing its version of the bill this month, the Senate fell just short of banning the use of one part of FISA — the partly lapsed provision that permits the F.B.I. to obtain business records without a full warrant — for gathering internet search histories and browsing records. While a majority of the Senate supported the move, it failed to reach the three-fifths majority needed to advance.

Ms. Pelosi came under pressure to permit a vote on the same idea in the House, but first she had to overcome divisions within her own party between a faction of progressives who were primarily focused on protecting civil liberties and a centrist group that was more focused on security. They agreed on ambiguous language that would limit the protections to data of Americans but disagreed about how expansively the FISA court should interpret it.

Some liberal civil-liberties advocates balked at the potential limits of the compromise and withdrew their support from the bill, compounding the collapse in support by Mr. Trump’s allies.

Ms. Pelosi on Thursday pinned the demise of the measure on the White House while also saying the Trump administration wanted unfettered surveillance powers that Democrats were unwilling to endorse.

“The administration, especially those in the Justice Department, really don’t want any bill that provides protections for American people,” she said at a news conference in the Capitol. “They want all the leeway in the world to do what they do. It is most unfortunate.”

On Thursday, Mr. McCarthy called for a short-term extension of the expired authorities while the talks were ongoing — a proposal with little chance of advancing.

Ms. Pelosi appointed three Democrats and two Republican allies of Mr. Trump, Representatives Jim Jordan of Ohio and Devin Nunes of California, to represent the House in the negotiations.

After Fires and Droughts, California Prepares for Heavy Rain

U.S. Struggles With Afghan Evacuees Weeded Out in Vetting and Now in Limbo