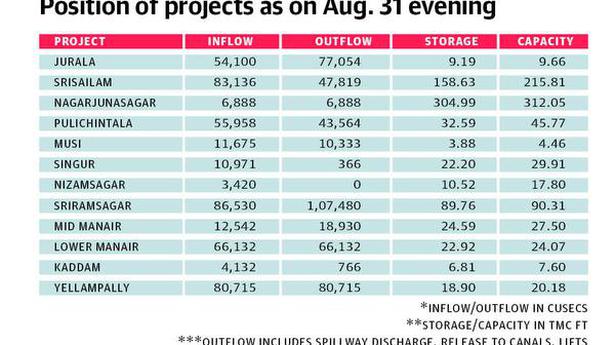 Rains in the local (Telangana) catchment areas as well those in the immediate upstream areas of the Bhima Sub-Basin in Karnataka are set to replenish the storage of Srisailam reservoir at least to some extent as it has fallen below 160 tmc ft against its capacity of 215.8 tmc ft.

The spillway gates were operated after a gap of about three weeks around 2 p.m., when the engineers lifted four crest gates for 1 metre height each to let 16,700 cusecs water into the river from the spillway.

Supplementation to the river flow downstream, however, has been going all along except for a few days with power generation. The spillway discharge was increased to 41,500 cusecs from 4 p.m., when six more gates were lifted for the same height, although the inflow remained constant at over 54,000 cusecs.

The storage of Srisailam has depleted to below 160 tmc ft due to the constant release of water to river course from power generation and release to various water drawal systems of Andhra Pradesh and Telangana.

Meanwhile, most of the streams and rivulets in the Godavari Basin were in spate with rains in their catchment areas for the last 3-4 days. However, rains have receded on Tuesday compared to the previous couple of days.

All the 28 medium irrigation projects in the Godavari Basin and eight in the Krishna Basin were also either in surplus or near surplus position. The cumulative inflow into the projects was 74,600 cusecs and outflow was 77,060 cusecs and their cumulative storage was 54.38 tmc ft against the capacity of 62.12 tmc ft.

On the other hand, all major projects in the Godavari Basin were getting good inflows. Discharge of flood from the spillway of Sriramsagar project resumed around 6 p.m. at 6,240 cusecs and it was 1 lakh cusecs at 8 p.m. on Tuesday from 24 gates as the inflow was stead at 86,530 cusecs. Another 5,000 cusecs was also being let into river after power generation.

Russia said Moscow would only use its nuclear arsenal in emergency situations and was not interested in a direct confrontation with NATO or the...

know - February 8, 2022 0
Another convict in the 2012 Manesar Maruti violence case was granted bail on Tuesday by the Punjab and Haryana High Court. Yogesh, one...

know - September 3, 2021 0
Financial terms and details of the newly signed agreement were not disclosed in the statement. "We have worked together to develop a deeper understanding of...

know - October 18, 2021 0
Praggnanandhaa won with a game to spare in the best-of-four-game rapid encounters With a stunning performance that attracted praise from the world’s elite, R. Praggnanandhaa...