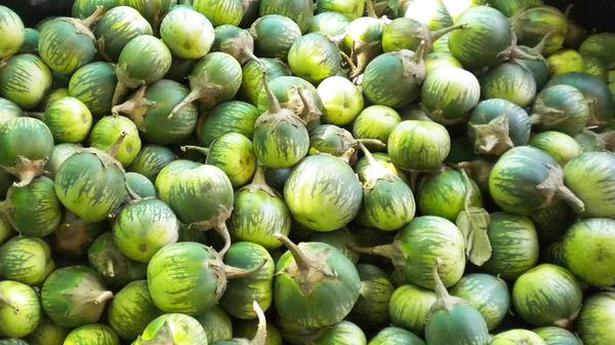 Efforts are on to increase the area under cultivation of Mattu Gulla, a special type of brinjal known for its unique taste and which enjoys the Geographical Indication (GI) tag, at Mattu and its surrounding villages of Kaipunjal and Uliyargoli in Udupi district.

Presently, Mattu Gulla is cultivated in about 225 acres of land in these villages, but there is a potential to cultivate it in another 140 acres of land, which is mostly fallow. Since the cultivation of Mattu Gulla is profitable, it is expected to help farmers increase their income.

The Mattu Gulla Belegarara Sangha has 210 farmers as its members. Lakshman Mattu, chief executive officer of the sangha, which helps in collecting and marketing the vegetable, said, “If a farmer invests about ₹60,000 an acre, he is assured of making a profit of about ₹1.5 lakh subject to vagaries of rainfall. The average yield for an acre is four to five tonnes. Last year, farmers made more profits, but this year, the profits dipped slightly because of heavy rain during the monsoon.”

Efforts to popularise the cultivation of Mattu Gulla by the sangha, the Department of Horticulture, and the Manipal Institute of Management (MIM) are bearing fruit. “In the last two years, the area under Mattu Gulla cultivation has increased by about 30 acres and nearly 20 more farmers have taken to its cultivation,” Mr. Mattu said. One of the farmers who took to Mattu Gulla cultivation two years back, Gururaj Bhat, said paddy cultivation was difficult and cumbersome. “Hence, I took to cultivating Mattu Gulla in 35 cents of land at Mattu. Last season, I made more profits when compared with this year,” he said.

The MIM is the Programme Implementation Agency under NABARD and is acting as a facilitator with Mattu Gulla growers. Harish Joshi, coordinator, Centre for Social Entrepreneurship, MIM, said, “Some persons owing fallow land at Mattu and its surroundings are contacting us for cultivating the brinjal crop.”

Some Mattu Gullas which have one or two black spots are not sold in market. Such “seconds” are given to needy persons.

But there is a proposal to preserve such Mattu Gulla in brine. “They can be used for making gojju during the monsoon, when the vegetable is not available,” said Mr. Joshi.

Mattu Gulla is transported in packs of 50 kg. This results in damage to the brinjals that are at the bottom of the pack. Hence, there is a proposal to develop paper trays to avoid damage.

Plans are on to set up a model farm to demonstrate the cultivation of Mattu Gulla in about an acre of land at Mattu village to cater to a large number of researchers and tourists. Many researchers from other countries too are coming to study the vegetable.

“We have identified three pieces of land for the model farm near the backwaters of Mattu, but are yet to finalise the land. Since the Mattu beach is nearby, it will also help tourists. We will be submitting a project on the model farm to NABARD, which could be a potential funding agency, and we can also take the support of private donors if more funds are necessary,” said Mr. Joshi.

The Chinese government has established informal police stations throughout Canada, Ireland and many other countries.

The new Gmail interface has arrived, and it’s cleaner than ever

know - March 2, 2022 0
Google has refreshed the Gmail UI, and Jack Wallen finds it to be an improvement over the...

know - July 5, 2021 0
Hospitals and health systems across the nation continue to adopt new technologies aimed at improving patient engagement. As companies like Amazon, Apple and...

know - January 20, 2022 0
Healthcare providers and insurers in Florida will use the state's own dispute resolution process for out-of-network bills instead of the controversial methodology in the...

US News Channel claims – Virus leaked by mistake of intern in Wuhan lab,...

know - June 21, 2020 0
President Trump’s campaign promised huge crowds at his rally in Tulsa, Okla., on Saturday, but it failed to deliver. Hundreds of teenage TikTok...

The Chinese government has established informal police stations throughout Canada, Ireland and many other...

know - September 26, 2022 0
Beijing: The Chinese government is opening illegal police posts all over the world. China claims that these posts are capable of cracking down...