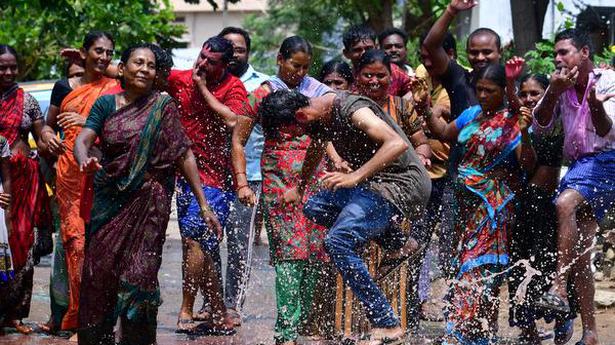 
Joy permeated the streets in many parts of the district on Monday as people celebrated Holi with great zeal.

Many villages, including several tribal hamlets, witnessed a flurry of activity as revellers had a gala time sprinkling water mixed with gulal on each other. A host of traditional cultural programmes including Kolatam marked the celebration of Holi at Pedda Thanda in Khammam rural mandal, Lokya Thanda in Kusumanchi mandal and elsewhere in the district.

However, Holi celebrations turned out to be rather low-key affair in some business localities in Khammam and various other towns in the old undivided Khammam district as a sizeable number of people preferred to remain indoors as a safety precaution due to “caronavirus scare”. This despite the fact that no case of COVID-19 has been reported from anywhere in the erstwhile composite Khammam district so far.

In Bhadradri-Kothagudem district, Vasantotsavam was held in the historic Sri Sitaramachandra Swamy temple in Bhadrachalam on the occasion of Holi. The preparation of Mutyala Talambralu for the ensuing Sri Sitarama Tirukalyana Mahotsavam traditionally began too, coinciding with the festival of colours.

In most other places in the State, the fear of COVID-19 robbed Holi of its colour. In Siddipet, Finance Minister T. Harish Rao participated in the celebrations and Municipal Chairperson B. Vijaya Lakshmi in Sangareddy.

In integrated Karimnagar district too, Holi was a low-key affair. There were no street shows or people coming on to the roads to play with colours. The handful of revellers, who did celebrate the festival, used only natural colours or by hurling eggs at each other.

There was no celebrations at the police headquarters either. Local politicians also restricted the festivities in their respective municipal divisions over COVID-19 fears.