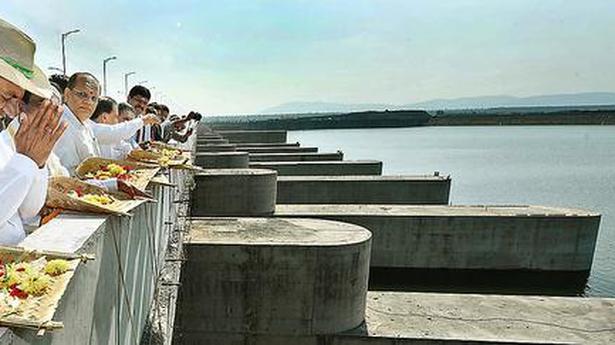 To meet the irrigation requirements of Telangana, all the engineering departments of irrigation sector would be bought under one roof he said and added that each circle would be headed by a chief engineer.

The Chief Minister, who visited the Kaleshwaram lift irrigation project and inspected the Medigadda barrage also conducted an aerial survey of the project in Mahadevpur mandal in Jayashankar-Bhupalapally district on Thursday. Later, he held a review meeting on irrigation as well as other issues with officials at the Collectorate in Karimnagar.

Mr Rao assured to fill up all vacant posts in the Irrigation department by June-end and construct quarters for the staff by April-end. He instructed authorities to take steps to lift 530 tmcs of Godavari water and also take up repairs of all irrigation canals during the summer season.

Briefing newsmen about KCR’s three-hour long review meeting, Minister for Health Eatala Rajender, Minister for Social Welfare Koppula Eshwar and Minister for BC Welfare and Civil Supplies Gangula Kamalakar said that the CM has given the sanction to construct 160 check dams at a cost of ₹ 1,000-1200 crore in the integrated Karimnagar district. The CM instructed the authorities to complete the construction of these check dams by June 2020 to ensure water throughout the year in the district.

The Chief Minister has also approved the construction of new vastu-compliant Collectorate by demolishing the existing one to accommodate all departments under one roof, the ministers said. They also said that the CM has instructed the district authorities to accord priority to Haritha Haram programme.

Expressing satisfaction over the progress of the cable stayed bridge on the outskirts of Karimnagar town, the CM also instructed the expedite the process of taking up Manair river front project to convert Karimnagar town into a tourist hub.

Center will give 86 True Net machines to increase the speed of investigation, 15...

After reaching the school, the teachers called the parents of the students, the lock...

know - July 26, 2021 0
Hindi NewsLocalMpBhindAfter Reaching The School, The Teachers Called The Parents Of The Students, The Lock Kept Hanging On The Gate Of The Class...

In Impasse Over New Covid Relief Aid, Neither Side Is Willing to Bend

Accident In Faridabad; Car Crashes Into a House In Haryana Faridabad Update | नशे...

know - September 22, 2021 0
GwaliorOne hour agocopy linkCross case registered on the complaint of both the societiesThe ongoing controversy over the plaque on the Samrat Mihir Bhoj...