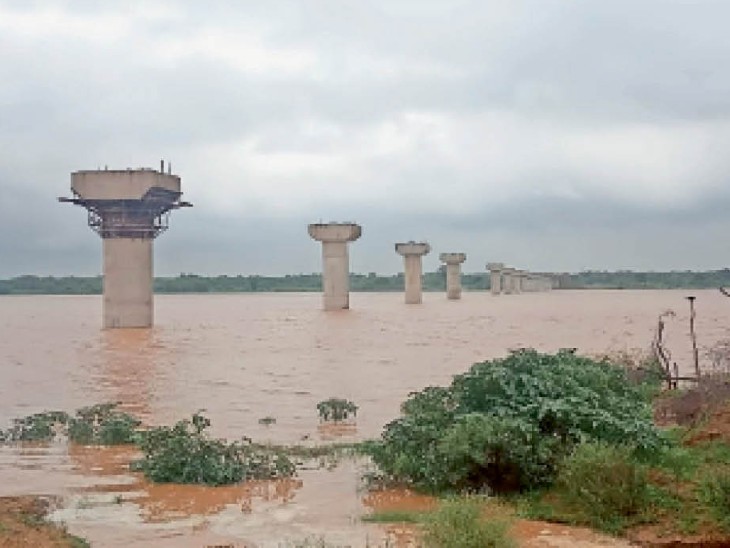 The water level of Bal river has reached the danger mark of 122 meters by Tuesday evening, it may reach 126 meters on Wednesday.

Chambal and Sindh rivers are in spate in the district due to incessant rains in Sheopur-Shivpuri and water released from Kota barrage and Madikheda dam. Chambal has reached the danger mark of 122 meters. The villages along the banks of Sindh river have also come under submergence. The water level of both the rivers is rising rapidly. In such a situation, the situation can worsen at night. The administration has issued an alert in the villages along the banks of the rivers. Collector Dr. Satish Kumar S and SP Manoj Kumar Singh are continuously visiting the villages coming under the submergence area. Villagers are being advised to vacate the house and reach a safe place.

Due to incessant rains in Sheopur-Shivpuri district, the water level in the tributaries of Chambal and Sindh is rising continuously. Chambal river has reached the danger mark of 122 meters. The water level of the Sindh river has also reached 5 meters, due to which the entire village of Chaikur in Girvasa on the banks of Sindh has come under submergence. At the same time, due to the floods in Chambal in Ater, the roads of about 10 villages including Khairahat and Devalaya have been closed. Due to the rise in the water level of these two rivers at night, the surrounding villages can get submerged.

People coming out through the ravines in the villages

Due to the increase in the water level of Chambal river due to the rains in Ater, more than 10 villages including Navali, Vrindavan, Kherhat, Gader, Chomho in the area have lost contact with the main road. In such a situation, the villagers have to come to Ater town through the rugged route for shopping. Apart from this, in view of the rising water level in the river and the possibility of releasing water from the Kota barrage, the administration had issued a high alert in the villages situated on the banks of the river on Monday. At the same time, due to the rise in the water level in the Chambal river, the Government Degree College campus of Ater has also been flooded. Due to which people suffered a lot.

Vigilance… got the household items of the villagers kept on the roof, got the animals freed

The whole of Chaikur of Girvasa village of Aswar has been submerged due to the rise of Sindh river. About 200 to 250 families live in this village. On the instructions of SP Manoj Kumar Singh, SHO Pankaj Mudgal has got the goods of the villagers kept on the roof of their houses. Along with this, the villagers have been asked to come out of the village and stay at a safe place. The village is being evacuated there. Apart from this, their animals have also been freed by the police administration. At the same time, the police took a pregnant woman to the hospital by bike.

According to Shahzad Khan, in-charge of the Central Water Commission Udi Chambal site, the water level of the Chambal river has reached the danger mark of 122 meters by Tuesday evening. With the intensity with which the water level of the river is rising, it is feared that by Wednesday morning, the water level of the river may reach 126 meters. In such a situation, Kachhpura, Kherhat, Gader, Chomho, Navali Vrindavan, Mukatpura, Ater, Dinpura, Chiloga, Koshad’s Madaiya, Nakhroli’s Madaiya, Ramakot, Gada-Chachad, Gyanpura etc. villages on the banks of Chambal river will become flood-prone. Although the administration has started relief arrangements in the submerged villages, along with police force has been deployed on the spot.

Due to the rain in the Alampur area for the last three days, where people’s life is disturbed. On the other hand the Sonbhadrika river is in full spate. Due to the construction of a new bridge on the river, a temporary kutcha bridge built for the passage of vehicles was washed away due to the strong flow of water on Monday. On Tuesday, due to the strong flow of water in the river, the traffic came to a complete halt. At the same time, the administration has deployed police force on the river for security arrangements. Let us inform that a new bridge is being constructed by the government in place of the old bridge on Sonbhadrika river located in Alampur city. For the construction of the bridge, the contractor had built a temporary kutcha bridge for vehicular movement inside the river, which was submerged in the strong current of water on Monday, stopping the traffic.