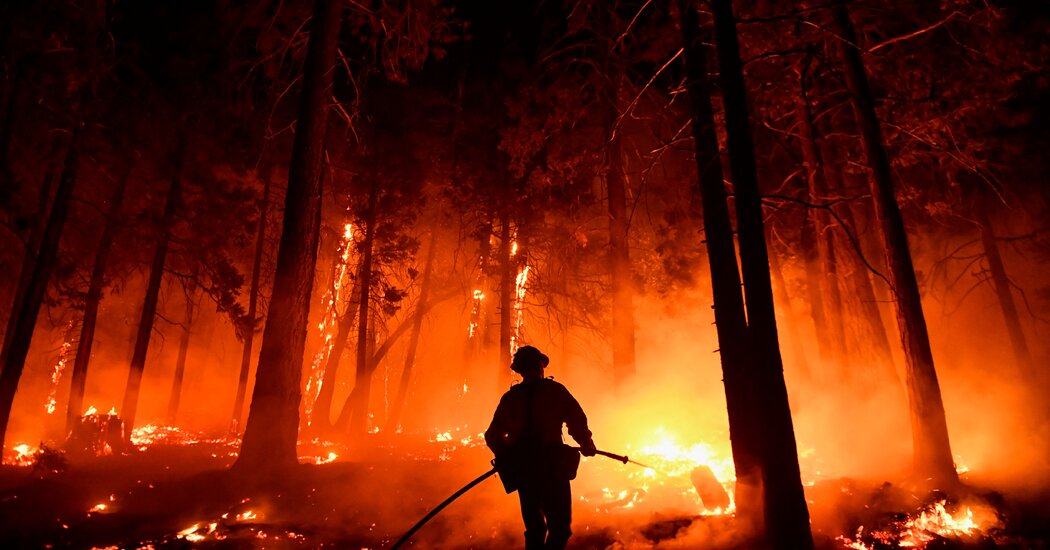 Wildfires in the Sequoia and Kings Canyon National Parks in central California are threatening sequoia groves containing some of the oldest and biggest trees in the world.

The Colony, Paradise and Windy fires were ignited last week by lightning, and park officials have been working to contain their spread with water and retardant drops, according to a statement on Monday.

But the fires have been difficult to suppress, in part because the Paradise fire, spanning more than 800 acres, is in steep, densely forested terrain and is inaccessible from the ground. In total, the fires are spreading across more than 1,000 acres without any containment.

Over the past year, wildfires have burned millions of acres across California and other Western states, destroying hundreds of giant sequoias, redwoods and more than one million Joshua trees.

Giant sequoias, which can reach ages of up to 3,400 years and grow taller than 300 feet, can handle — and, to an extent, depend on — periodic fires. Their bark helps protect them and insulates them from the heat. At the same time, fires clear the soil around sequoias, leaving it in a prime condition for sequoia seeds to grow. Fires also burn off trees that compete for the sunlight that young sequoias need to flourish.

But the increased severity of fires in recent years, fueled by the quickening pace of global warming, has posed a major threat to the state’s most beloved trees. In last year’s Castle fire, between 7,000 and 11,000 large sequoias died across the Sierra Nevada, or about 10 to 14 percent of them, according to the National Park Service. Two thirds of giant sequoia grove acreage across the Sierra Nevada burned between 2015 and 2020, compared to a quarter in the previous century, the park service has said.

Wildfires have consumed over two million acres in California this year. The largest, the Dixie fire in Northern California, has burned nearly one million acres in the past two months and is 75 percent contained, according to a New York Times wildfire tracker.

On Monday, President Biden flew over the Caldor fire, which has consumed more than 200,000 acres south of Lake Tahoe and forced thousands of people from their homes.

“These fires are blinking code red for our nation,” said Mr. Biden, who used the occasion to promote two bills pending in Congress that would fund forest management and more resilient infrastructure as well as combat global warming.