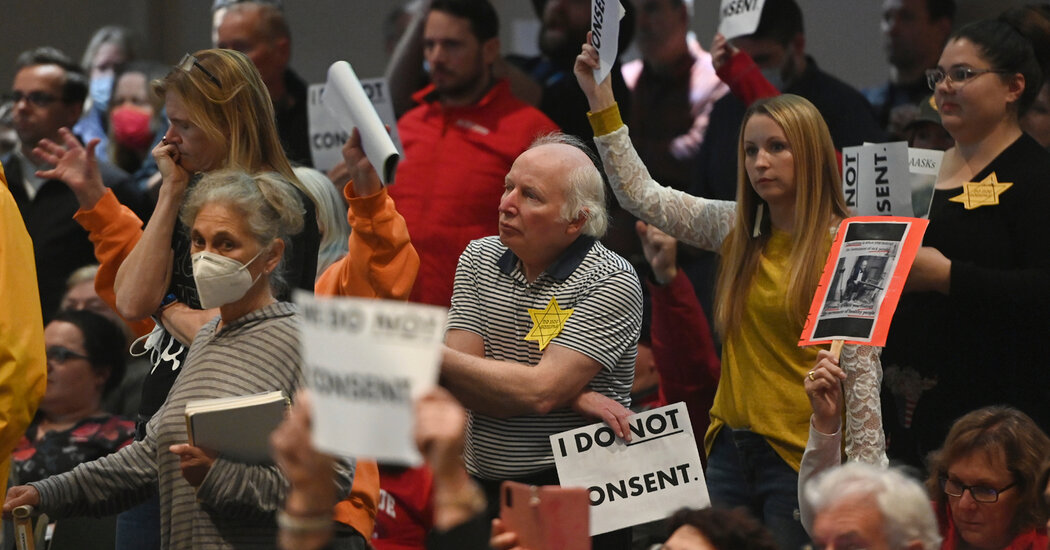 The Anchorage Assembly approved a mask mandate on Tuesday after two weeks of heated public discussion amid a Covid outbreak that has forced doctors to ration life-saving care in Alaska’s largest city.

The vote was 9-1, concluding a tense, often chaotic debate that included doctors being heckled by members of the public, an armed man being arrested, and protesters sparking outrage by turning up to meetings wearing Stars of David — an attempt to liken mask requirements to the persecution of Jews in the Holocaust.

“The time to act is now,” Meg Zaletel, an assembly member, said on Tuesday night while pressing for a vote. One person in the crowd shouted objections, leading security officers to intervene.

The order requires everyone to wear a mask or face covering in public indoor spaces, with limited exemptions for younger children and for religious or medical reasons.

Alaska has recorded the highest coronavirus case numbers per person in the United States in recent weeks. Although new infections have fallen from a late September high, the surge has overwhelmed hospitals, especially in Anchorage, where many of the state’s patients come for critical needs.

Heart surgeries have been canceled to preserve space in hospitals. One facility rationed oxygen. And doctors have been forced to implement “crisis standards of care,” prioritizing some critical patients over others because of the lack of resources.

One patient who needed emergency surgery was not attended to; a second was taken off of dialysis because another needed it. In both cases, the patients who received substandard care died.

Gov. Mike Dunleavy has resisted a statewide mask mandate, but assembly members in Anchorage — home to about 40 percent of the state’s population — moved forward. Doctors had gone to the assembly meetings in recent weeks to detail the crisis they have been facing, but they faced blowback from community members. One man followed doctors out of a meeting, calling them liars.

Anchorage Mayor Dave Bronson, who has opposed a mask requirement, vowed to veto the mandate, although it appears the assembly has the votes to override it.

About 51 percent of Alaska’s population is fully vaccinated, according to a New York Times database, lower than the national figure of 57 percent.

After Fires and Droughts, California Prepares for Heavy Rain